Nursing Theories are very apprehended, seemingly unnecessary aspects of nursing education. Students often study famous nursing theorists, their theories and beliefs then try their best to reproduce it easily for their nursing school exams. They then wonder what they are going to do with all this information when they graduate while they should learn how to put in an IV.

Turns out, the care provided by a nurse, their job, their theory or in other words, the philosophy that they’ve based their job on, their work ethic, the manner they treat and their behavior towards the patients is a combination of nursing theories by various nursing theorists they were made to study. 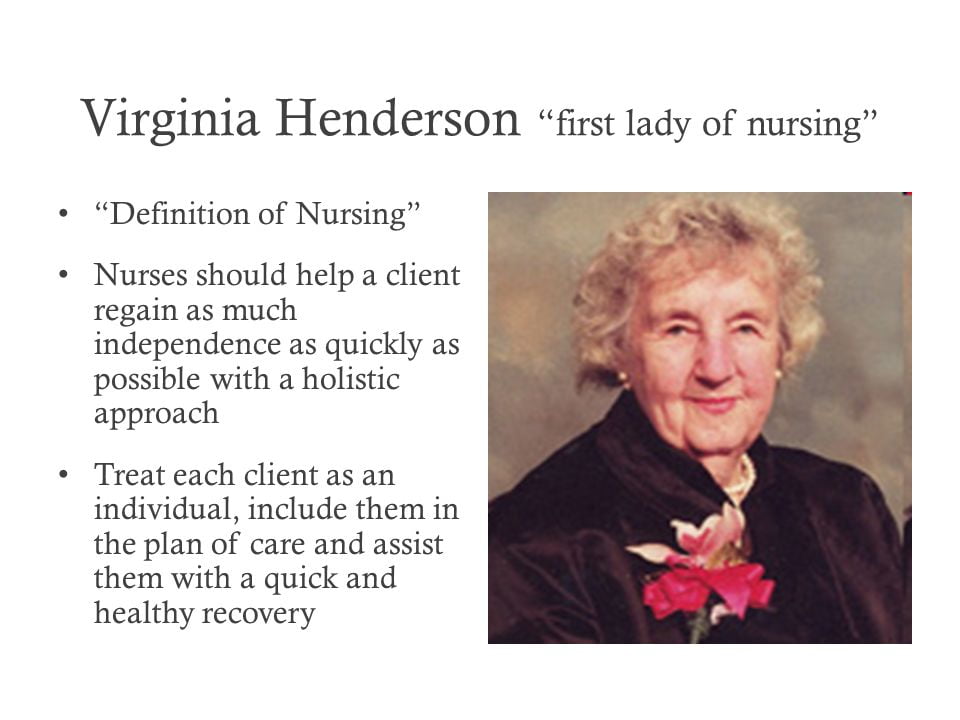 A renowned nursing author and education, also known as the “Nightingale of Modern Nursing”. She developed the “Need Theory” which focused on strengthening the client’s ability to be independent so that their healing process is continued after hospitalization. The definition provided by her was one of the first to indicate the difference between medicine and nursing. In her nursing theory, the nurse’s function is to assist an individual who may be sick or well, to perform certain activities that will enrich their health or improve that the individual would otherwise be able to perform without any aid provided he possessed the necessary knowledge, strength or will. This must be done in such a manner that they achieve said independence as quickly as possible. In a way, she needs to get inside the skin of her patient in order to understand what is needed for them to recover. 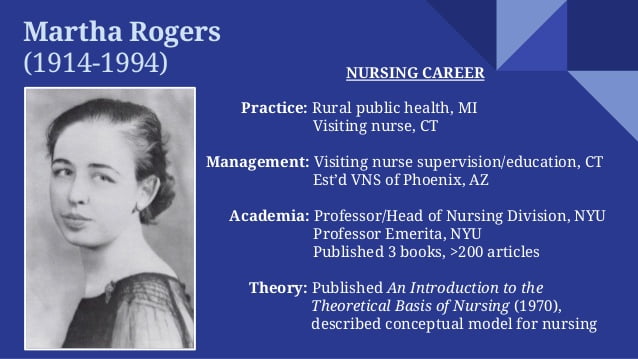 Martha Rogers enhanced her nursing theory in the course of many years of education. Along with being a diploma nurse, she also held a Master’s of Public Health and Doctorate of Nursing from John Hopkins University. She not only considered nursing as a science but also as an art. Martha Roger’s theory is known as Unitary Human Beings. According to this nursing theory, nursing aims to encourage interaction between the person and the environment that is in harmony, to build the morality and coherence in humans, to also regulate the interaction of humans and their environment so that the individual achieves the utmost health capabilities. Due to the fusion of an early foundation in arts, her passion for science, and science background helped her develop this abstract system. 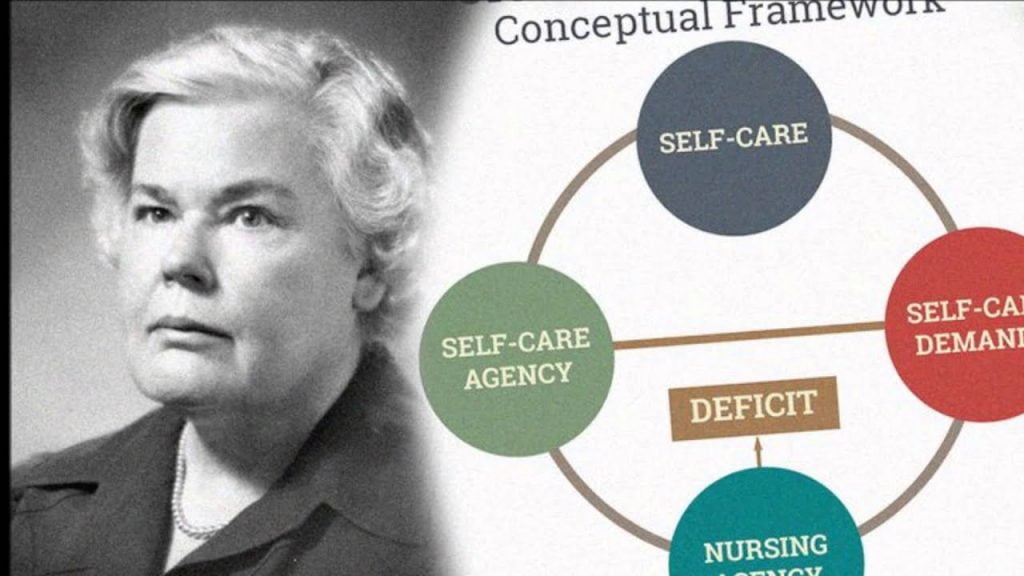 Her nursing theory is also known as Self-Care Theory. Her idea of health is a condition identified as the wholeness of human structures and of the mental and bodily functions. It emphasizes the psychological, physiological, social and interpersonal aspects. Her main belief is that an individual should be independent as well as responsible for their own health and their family’s too. According to Orem, to promote self-care practices, a person must possess the knowledge of potential health. Orem also states that nursing is a helping service, technology, and art. 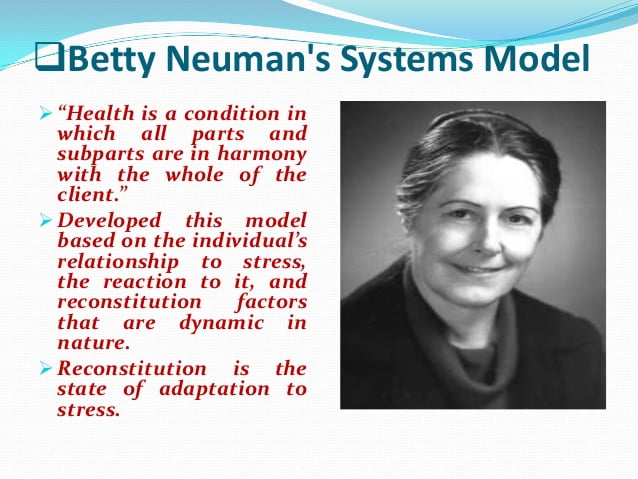 The nursing theory developed by Betty Neuman, mainly explains the client system’s response to the stressors in their environment, whether actual or potential. The theory also focuses on the utility of various levels of nursing prevention intervention to attain, maintain and retain the optimal client system wellness. The concern of nursing, according to this nursing theorist is the prevention of stress invasion. If the stress is not maintained or prevented, then the nurse must defend the client’s basic health structure in order to obtain or maintain a maximal level of wellness. According to Neuman, care is provided through Primary, Secondary and Tertiary prevention modes. 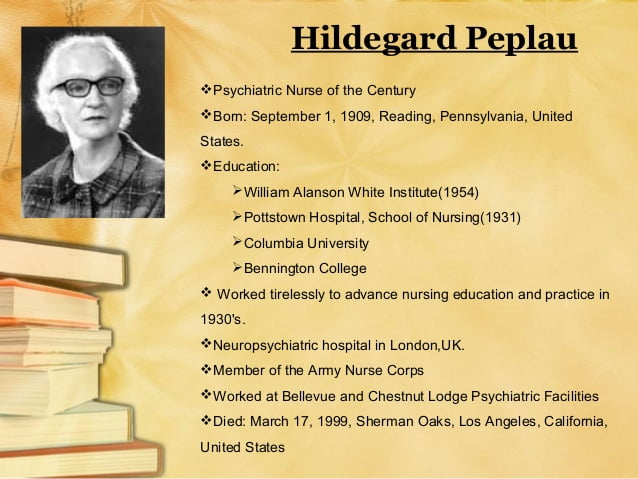 Peplau’s nursing theory, the Interpersonal Theory is explained in four phases. According to Peplau, the relationship of a nurse and their patient evolves through these four stages orientation, identification, exploitation, and resolution. She states that nursing is a maturing force that is recognized as the personality evolves and goes through educational, therapeutic, and interpersonal processes. A personal relationship is developed between a nurse and the patient only when the need is felt. Clinicians prefer this theory when it comes to treating patients with psychological problems. 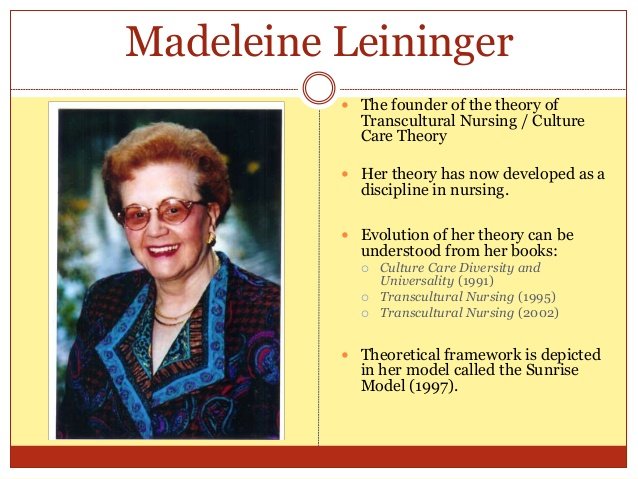 The Transcultural Nursing theory, first established in 1978, is considered to be one of the newer nursing theories. For Leininger, providing care in accordance with the patient’s cultural values, practices and beliefs is the aim of nursing. According to this nursing theory, care is the pure essence of nursing, it is the differentiating and integrating characteristic. Leininger believes that without caring there is no cure but there can be caring with curing. It is necessary for the health care employees to interpret care on a deeper level along with their different cultural values, lifestyles, health beliefs and values as it will form the foundation to provide care according to the individual’s culture. 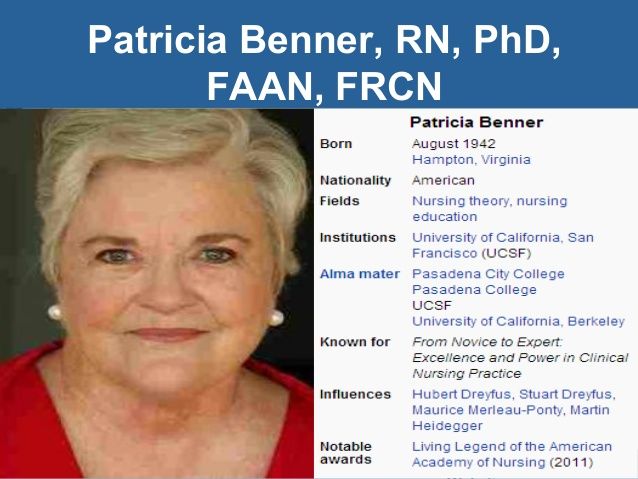 Out of all the nursing theories on this list, this is arguably the easiest to understand. Benner makes her case by saying that it is possible for a nurse to gain knowledge and skills without the need to learn the theory.
As a learner gains vital expertise, every step builds on the previous one, these levels, in turn, reflects a movement from reliance on abstract principles to the use of past concrete experience. In simple words, this famous nursing theorist says that Simply put, Benner says the experience is a prerequisite for becoming an expert.

Practicing nurses may relate to different nursing theories together, a few may relate to maybe one. Most might apply Benner’s theory as one goes from knowing nothing to learning and growing their confidence, to maybe even being an expert in an area or two. When it comes to Leininger’s Transcultural Care Theory and working at major medical centers it is important to understand the differences between cultures that have divergent interpretations of health care, life and death and make sure to provide care in the most respectful manner to your patients.


As nursing theories accept various perspectives, nurses embrace all or some of every theory. The nursing theory study is important because it helps understand nursing on a deeper level, the dynamic aspects, the mobility, and the motivation. One can form their own concept of what it is like to be a nurse with the help of a few nursing theorists, and use it to provide the most effective, safest and optimum care for their patients.
TagsBetty Neuman Dorothea E. Orem Hildegard Peplau Madeleine Leininger Marsha Rogers Nursing Practices Nursing Theorists Nursing Theory Patricia Banner Virginia Henderson

Kaido: 10 things you should know before watching the Wano Arc of One Piece
FirstOneTV: 7 best alternatives to FirstOneTV and latest update
Comment