Footwear you wear today might have been designed 900 years ago

Twitter never ceases to amaze its user base, just when we thought we had seen it all, a Twitter user from India tweeted a picture of a sculpture from a 900-year-old ancient monument which shows the sculpture of a man wearing footwear similar to what we call a sandal in today’s day and age.

V Gopalan, an Indian resident posted pictures of 900-year-old sculptures from an ancient temple in the town of Avudayarkoil in Tamil Nadu, India on his Twitter account which went viral.

V Gopalan captioned his tweet, “Ancient Indian men were very fashionable centuries back! They were wearing sandals thousand years back – the same model which BATA INDIA sells today! Zoom in to the pictures to see the similarity! Avudayar Koil, TN #IndianHeritage” 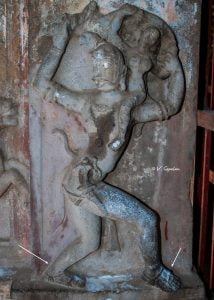 In the images shared by V Gopalan, the design of the footwear portrayed by the sculpture in the 900-year-old temple bears resemblance with sandals sold in today’s market by the brand Bata.

And as usual, Twiteratti never lets us down, V Gopalan’s post took the Twitter world by storm and in the thread, another user posted pictures of ancient sculptures of women wearing stylish heels which are worn by women of today.

Pravesh Kanthed of India shared a picture in the thread captioning it, scandal wore by women 1400 years ago, “Wearing heels 1400 yrs back! Kailasanathar Temple, Kanchi.”

The thread went on to reveal many interesting pictures from ancient times.

Safdarali Rizvi
Safdarali Rizvi the management graduate. Has been an avid book reader all his life so naturally loves playing with his words. His curiosity for discovering futuristic opportunities drives him to enlighten the entire Geekymint team with exclusive and intriguing news. He has a real passion for calisthenics and sports. His management abilities and hunger for learning brings tremendous value to our team.
Previous articleMobdro – Download & install app Apk on Android, iPhone, iPad, iOS, MAC, PC, Firestick & FireTV
Next articleSonos files a lawsuit against Google for using its patented wireless speaker technology

Putlockers was the largest free movie streaming in the world but due to legal and copyright issues the website had to shutdows....
Read more
Apps

Just like every other individual who loves to watch the latest TV shows and movies at the comfort of our home absolutely...
Read more

A good meme gets a smile on everyone’s face but if you need to get someone launching to your meme and you need to...
Read more

In a move which may prove to have an upward trending effect for cryptocurrencies, earlier in the week, a hedge fund owned by British...
Read more

Rimac Automobili, a Croatian company which produces super high performing all-electric supercars sold 10 percent of its company's stake to Porsche that is a part...
Read more