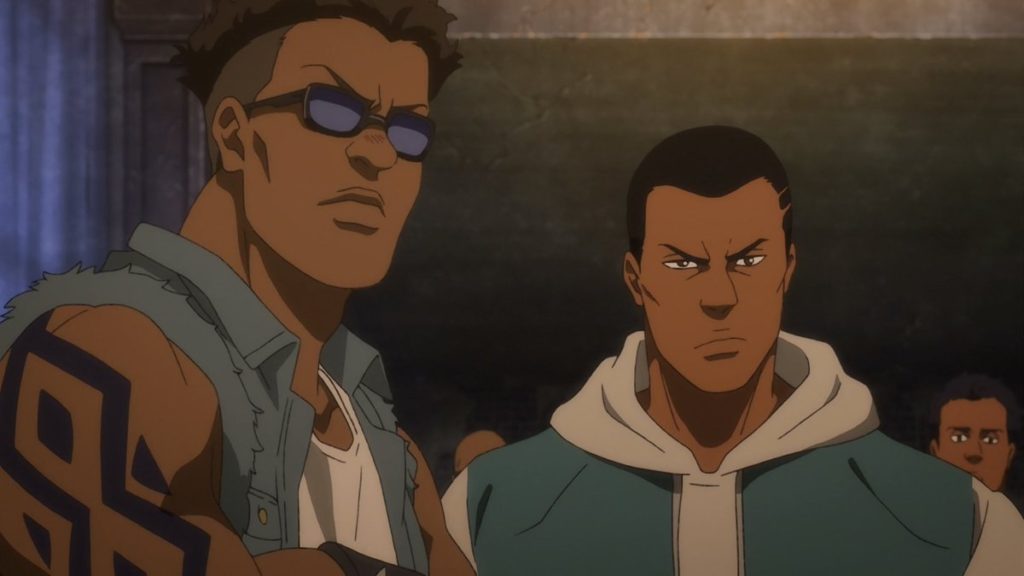 When it comes to diversity and representation, anime hasn’t backed down. Throughout the history of anime, there have been multiple black anime characters who have stolen the show and our hearts, sometimes even more than the protagonists. These characters have been portrayed as strong, elegant, and humorous.

Racial representation in anime is really a step forward for a conservative society like Japan, where racial discrimination is still rampant. This is especially real for black people who have been the subject of racism and racial segregation for centuries.

Let us take a look at some of these black anime characters who have not only succeeded in gaining the attention of the fanbase but sometimes carried the entire show on their backs. These characters have been celebrated and give us an important reminder that no matter the person’s skin color, every person is just as important as someone else.

Killer B from Naruto Shippuden

He is probably one of the most well-known and iconic male black anime characters in the masterpiece anime, Naruto Shippuden. Also known as the Jinchuriki of the Eight Tales, he is one of the strongest and skilled ninjas in the world of Naruto. Hailing from Kumogakure, B has displayed exceptional fighting skills and swordsmanship, control over his Tailed Beast, and the ability to read a situation and develop strategies during a fight, time and again.

Other than being one of the strongest, B is also humorous and eccentric in a good way. Well, if you are a fan of Naruto, you won’t deny that you totally vibed to his dope freestyle and ability to come up with rhymes anytime anywhere!

Although he was a side character and appeared quite late in the series, Love Aikawa has to be one of the strongest of the 9 Visoreds in the series. He flaunts exceptional skills when it comes to fighting and swordsmanship. He yields Tengumaru, his Zanpakuto, and has a sick sense of style. He can be seen sporting a green jogging suit, mirrored sunglasses, and has spiky afro-styled hair.

He is also a very relatable character as he can be seen lazing around and reading manga most of the time (remind you of someone?). He also has the tendency to spoil a story by narrating dialogues and giving his own analysis of what the character meant by it in a very dramatic and hard-boiled manner.

However, he can get really serious during fights and shows a lot of care and compassion towards his teammates. He can be very brutal and cold when it comes to chopping down his enemies and carefree and lively when it comes to fooling around with his friends.

The former Captain of the 9th Division of the Gotei 13 is an all-time fan favorite. Despite being visually impaired, his fighting skills and marking abilities sweeps away all the rest. He is extremely powerful and yields his blade named Suzumushi which can cut down anyone with just one strike.

Although he becomes one of the villains by the end of the series, Kaname Tosen was a seeker of justice and cared deeply about the ones whom he loved. Maybe this is exactly why he did the things that he did, which ended up bringing his downfall.

Captain Tosen was also well-respected by his subordinates during his time as the captain of the 9th Division. He was especially adored and idealized by his Lieutenant, Shuhei Hisagi, whom he saved once and also mentored him later. And let’s face it, we all drooled over this muscular black anime character and cried with him when he told his story.

Bleach topples all the rest when it comes to strong black representation. And it perfectly portrays strong female characters as well. Yoruichi is probably one of the most iconic female black anime characters in the series other than Tier Harribel.

One of the most badass characters, Yoruichi is a fantastic fighter and an overall character. She hails from one of the Four Noble Families of the Soul Society and flaunts her talent by becoming the head of the clan, Captain of 2nd Division of the Gotei 13 (now ex), and also the Supreme Commander of the Onmitsukido (now former). When it comes to physical prowess on the battlefield, her skills are noteworthy. No wonder she earned the title of Flash Goddess for her exceptional speed and attitude in performing the Flash Step. She even trained some of the bests in that technique like Soi Feng and Byakuya Kuchiki!

While in the human realm, Yoruichi had the ability to turn into a talking cat while interacting with Keisuke Urahara and Ichigo and company. She also has the dirtiest sense of humor and is one of the most well-liked characters in Bleach whom we all fell in love with.

This badass teenager might don a baby face but don’t let that trick you at all! Because she can break a bone or two in your body if you mess with her.

She is the apprentice butler of the Zoldyck Family and she will take on anyone who attempts to trespass the Zoldyck estate. If you come across her, run for your life as she won’t back away from using force to expel you! This is proven when she takes down a trespasser and his 100 accomplices when she was just 10 years old.

Although she is very young, she is extremely fierce and her abilities earned her the position of the butler and guardian of the Zoldyck family. We are definitely rooting for her.

Jet Black is another iconic anime character of color who stars in the equally iconic anime of all time, Cowboy Bebop. He was the officer of the ISSP and later turns into a bounty hunter. He is also the captain of Bebop and is an extremely charming and captivating character in the entire series.

He is known for his muscular built and his robotic prosthetic left arm and is the most feared and revered bounty hunter in the entire galaxy. He teams up with Spike, Faye, and Edward and there is a remarkable switch in his personality when he is with them, acting all chill and friendly.

He is extremely wise given his life experiences and sometimes gives crucial advice to his companions. He is also well-respected among his peers and acts as a father figure to everyone in Bebop.

This anime character with African origins hails from South Africa. Due to this sole reason, he is regarded as “the stranger” by the Japanese who are extremely conservative and treat outsiders or ‘gaijins’ which suspicious eyes. However, he has been portrayed to have blue eyes and has a Japanese surname although it hasn’t been clearly mentioned whether his real surname is African.

He is one of the strongest characters in the anime and is a member of the Juken Club. He is an extremely talented fighter and also has really strong instincts and can take on almost anyone in a fight.

Anime with a black protagonist for you to watch

There are countless anime with a black lead that you watch on any anime streaming site in subbed and dubbed versions. Among the best anime of all time with black protagonists are – Afro Samurai (which is also a samurai anime), Mitchiko and Hatchin, Canon Busters, Black Lagoon, Blade- Anime, Basquash!, Yasuke, Carol & Tuesday, Neo Yokio, Castlevania, etc. These anime top the list when it comes to black representation and I will highly recommend everyone to watch them.

Although anime has made considerable progress in black anime character portrayal, there still remain racist ideas and stereotypes deeply enmeshed in the representation of these characters. This gives us an idea about the attitude of Japanese people to anyone they consider outsiders, especially those with darker skin color. Racial ignorance and prejudices still remain to be one of the top maladies of Japanese society and a lot of work have to be done in this regard.

The world of anime is diverse. Other than these anime with black representation, you can also dive into a variety of genres and anime like yuri anime, action anime movies, sad anime movies, horror anime, anime based on video games, etc. I hope you have fun watching all these anime and let us know what you think in the comments down below!