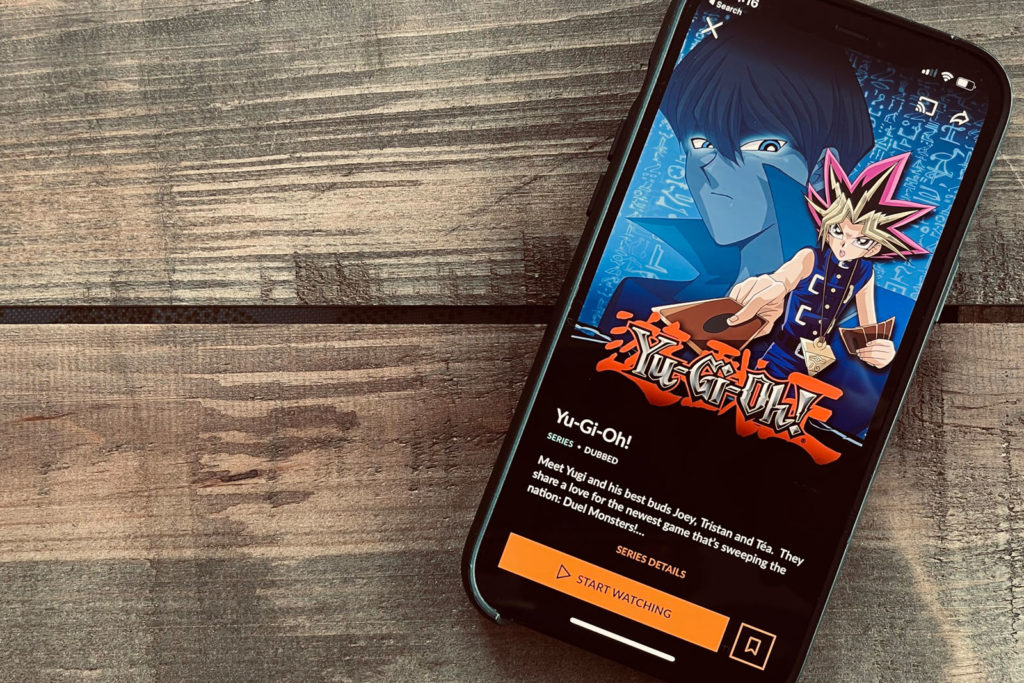 If you are a fan of anime, manga, and all that jazz, the name “Crunchyroll” is not new to you. Crunchyroll is one of the top anime streaming platforms that are widely popular all over the globe. The website provides an over-abundance of anime, both popular and underground, that the viewers can choose from. Since the platform has gained such insurmountable attention in the current times, it is necessary to do an overall Crunchyroll review to give you a better idea of what it is about and whether if it is even worth subscribing to it.

In recent times, anime and manga have witnessed a boost in their fanbase with audiences worldwide gaining access to the vibrant world of Japanese animated content. With people getting hooked onto these shows and series came a higher demand for streaming services where they could choose to watch their favorites from a plethora of options. There are also several Crunchyroll alternatives available that serve the same purpose.

Even a few years back, one would have to spend hours on the World Wide Web to find a decent website to watch their anime from. But that story is long gone now, as various new websites are coming up every day for streaming anime.

Crunchyroll, like other streaming platforms, also offers simulcast shows. These shows in particular broadcast their episodes about half an hour after they are originally aired on Japanese television. Right now, Crunchyroll’s simulcast library consists of 40 shows including, Boruto, Black Clover, My Hero Academia, Ace of the Diamond, and One Piece to name a few.

And this is not all. Crunchyroll also offers you a selection of dramas that include a live-action adaptation of Death Note, a very well-known anime loved by fans globally, a few Bruce Lee movies, and some Ultraman shows. Including these dramas in their collection has succeeded in drawing more audiences who might be interested in them.

Since we are doing a complete Crunchyroll review, it is up to us to provide you with all the necessary information and details about the plans and pricing for this website. So, take a seat and read on to figure out exactly which plan serves your best interests!

Crunchyroll offers you both a free and paid plan. The free version comes with in-episode ads and does not include the simulcast shows. Another limitation of the free tier is that you do not get access to the entirety of Crunchyroll’s library.

The Crunchyroll premium plan costs $7.99 per month and gets rid of all these limitations. You get access to all the simulcast shows along with every anime and manga that the website has to offer. Crunchyroll also offers a Mega Fan pack for $9.99 per month which also allows offline viewing and multi-device streaming. The pocket pinch for a year’s worth of Mega Fan pack is $79.99 with a 16% discount on the monthly plan.  It is needless to say that both the free and premium plans allow streaming in 1080p. 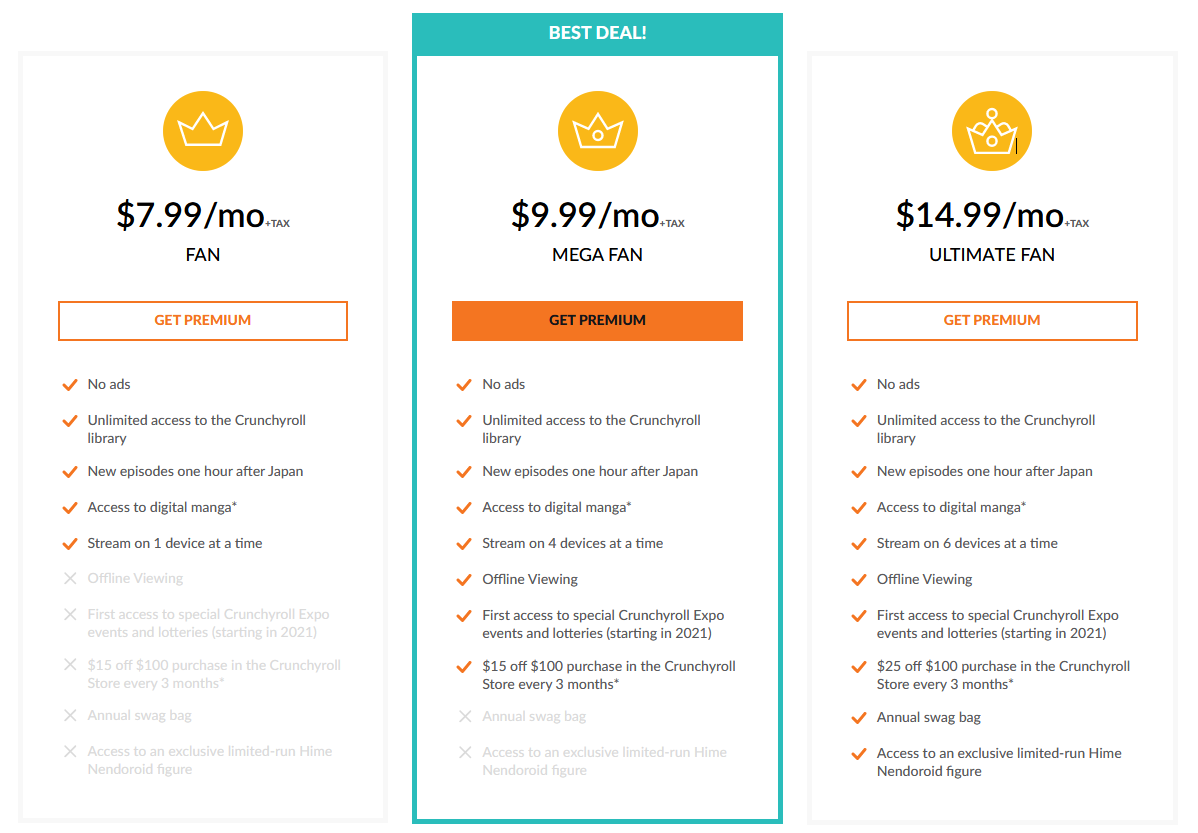 Crunchyroll also offers viewers a free trial for all its premium plans for 14 days. If you do not feel like the platform is suitable for you, you can cancel your subscription anytime within these 14 days without having to pay for it. If you are new to this platform and just want to test the waters, the Crunchyroll free trial is just for you!

Which devices are compatible with Crunchyroll?

The best part about Crunchyroll is that it is an extremely versatile website that is available on multiple platforms and media streaming devices. You can access Crunchyroll through Chromecast, Apple TV, Fire TV, and Roku. Not just these, you can also access it through multiple gaming consoles like Xbox One, PlayStation 3, PS4, and Wii U.

However, the most popular way of accessing Crunchyroll is through the web. Their website is quite user-friendly and easy to navigate through. You can also update your profile by giving in your basic information and your anime preferences so that the website can give you suggestions based on your interests.

Crunchyroll also has its app that you can find on Playstore for Android and App Store for Apple.

Our Crunchyroll review would not be complete without mentioning the features that are unique to the platform. Two of these being the apparel store and the manga store. Yes, you can shop for exclusive anime-related merchandise like clothes, physical copies of manga and light novels, action figures, and home videos! The weeb lifestyle is very demanding and Crunchyroll has done an amazing job to support it. Every anime otaku all over the world is thankful for the existence of this platform.

Most of the anime in Crunchyroll’s library comes with English subtitles to help you understand what the characters are saying in Japanese. Only about 50 anime from the entire collection come with an English dubbed version as well.

The platform does not support any offline downloads on mobile devices which is a notable limitation. The platform also does not filter out its mature content, as a result of which children can easily gain access to explicit content meant only for older viewers. The platform can and should do better in this regard.

Another significant limitation to this anime-streaming service is that some of the content is not available to a lot of countries. However, this barrier can be overcome with the help of a good VPN.

Crunchyroll vs Funimation: Similarities and Differences

That being said, Funimation has a few anime that are unavailable on Crunchyroll like SK8 the Infinity, Horimiya, Wonder Egg Priority, Cowboy Bebop and Initial D. At the same time, you won’t find popular ones like Jujutsu Kaisen, Hunter X Hunter, KonoSuba, Haikyu! Etc., on Funimation.

Now it is up to you to decide which Anime-streaming platform you would opt for based on your preferences.

On how many devices can you stream one Crunchyroll account?

Final words: Is Crunchyroll worth it?

It can be safe to say that Crunchyroll has emerged to be one of the most popular anime streaming sites in recent times. As we can see from our Crunchyroll review, the platform offers you thousands of anime that you can watch with only a click. Now you don’t even have to wait for your favorite anime to come on TV to watch them. All you have to do is opt for a plan (or not) and get access to a diverse range of options anytime anywhere. Crunchyroll has made watching anime faster and easier for millions of fans all over the world. If you ask me, I would suggest going for Crunchyroll today!