Funimation vs VRV: Which is better for streaming anime 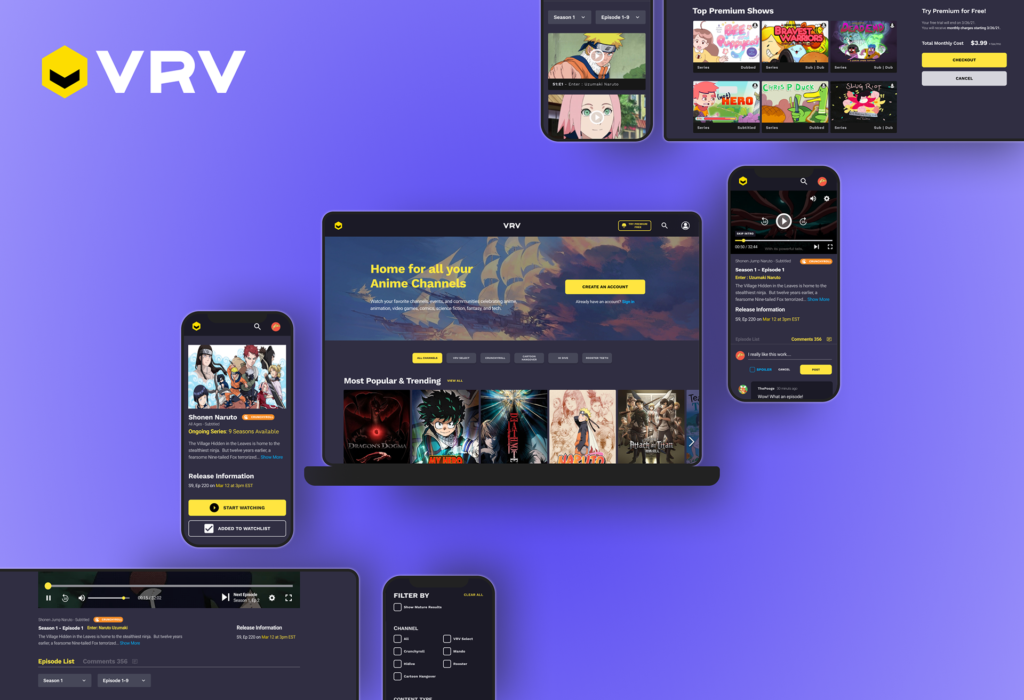 Anime-streaming websites have received a major boom in the 21st century. With more people entering into the world of anime, there is a need for more streaming platforms to offer their services in order to cater to the needs of these fans. Funimation and VRV have been quite the game-changers in this field.

You will find thousands of anime in the collections of Funimation and VRV. These anime-streaming platforms boast myriad genres of anime that will surely blow your mind. And you can watch all these anime on Funimation and VRV in high-quality videos that come in subbed and dubbed versions.

Let us have a showdown between these two vigorously popular anime streaming websites and see who wins in this friendly match of Funimation vs VRV!

Funimation vs VRV: What to compare?

While Funimation is a standalone platform that deals with all-things anime, VRV is a platform that is home to several streaming services like Crunchyroll, Hidive, and also Funimation. Others include Boomerang, Mondo, etc.

At the same time, both streaming platforms have similar features. On both of these platforms, you can watch lots and lots of anime in 1080p. And the best part is that you can download all these high-quality videos to watch them for later, in both these streaming services. VRV also lets you stream on multiple devices from one account.

When it comes to availability, there is a significant difference between the number of countries each of these streaming platforms is available. Let us take a look.

Funimation is available in only 49 countries. These countries include Canada, Ireland, Australia, Brazil, Mexico, New Zealand, the United States of America, and the United Kingdom.

And VRV is available in only 1 country as of now, the US.

Whereas VRV can do heaps better in this regard, Funimation also needs to up its game when it comes to availability.

It is a well-known fact that Funimation’s library is superb. With anime spanning across various popular and niche genres, it has definitely lived up to its reputation. You can find more than 800 anime and movies on this streaming platform. You have titles like Death Note, Mirai Nikki, Kakegurui, Kaguya Sama: Love is War, Attack on Titan, Dragon Ball, One Piece, My Hero Academia, etc. available on Funimation. However, it also lacks hot and popular titles like Jujutsu Kaisen.

Since VRV brings together a lot of streaming services in one place, it has access to all of its anime. It boasts the most of Crunchyroll’s library with more than 20,000 titles. And since Funimation has been included too, you can also get access to almost all the numbers of Funimation.

Funimation is well-known for its dubbed content. The platform offers over 800 titles with English dubs. You can watch all anime in subbed and dubbed versions on Funimation. Long ago, there was a tryst between Crunchyroll and Funimation. It was decided that all the subbed content would go to Crunchyroll’s library and the dubbed anime would go to that of Funimation.

You can watch all these anime, ad-free and at high quality.

When it comes to subbed and dubbed anime, VRV can easily tackle Funimation. You can watch high-quality anime videos in both subbed and dubbed versions on VRV. Once again, VRV’s multi-platform feature takes it one step ahead in the game compared to other smaller streaming services like Hidive.

Therefore, you can watch these English dubbed anime on both Funimation and VRV with ease.

Funimation is compatible with multiple devices and platforms like Amazon Kindle, Amazon Fire TV, Apple TV, Chromecast, Roku, Samsung and LG Smart TVs, PlayStation 4, Xbox One. It is also one of the few streaming services that is compatible with Nintendo Switch. You can also run Funimation through a web browser and the Funimation app is also available on both Android and iOS devices.

And VRV is no less when it comes to compatibility. This streaming service is supported on a number of devices including, Amazon Fire TV, Android TV, Apple TV, Chromecast, Roku, PlayStation 4, and Xbox One. You can also run it on browsers like Chrome, Firefox, Edge, and Safari. The app is also available for all Android and iOS devices.

Funimation has 3 offers for the viewers in its box. These are its Premium Plans which come with a number of perks and benefits if you subscribe to them.

You also get a 14-days Funimation free-trial version for you to check out first and settle on after.

Whereas, VRV gives you access to the libraries of Funimation and other streaming platforms for $9.99/month only! However, it does not give you too many benefits other than watching anime, unlike Funimation whose Premium Plans give you access to its store and lets you engage in discussion about your favorite anime with other viewers.

You can get a VRV free trial for 30-days to make up your mind.

The Funimation website is well-designed, articulate, and attractive. You can easily figure out the nooks and crannies of the website quite easily. The website is also pretty interactive and in tune with its viewers’ needs and wants.

In this case, VRV’s web interface is similar to that of Funimation. It is well-oriented, user-friendly, and stylish. At first, you will have to select the streaming service you would want to go for. The home menu also features its latest recommendations from each of these channels. You also get personal recommendations customized specially for you!

The Funimation app is just as bubbly as the website. It is interactive and easy to use. You can run this app on any iOS or Android platform without any hassle. The app ensures smooth video play and obstruction-free browsing.

The VRV app is a lot more in tune with modern times than the website. The video also plays smoother than that on the web. You can skip forward or backward ten seconds on whichever video you are watching on the app. This makes the VRV app a whole lot more convenient than its website.

VRV’s alternatives include Funimation, Crunchyroll, Hidive, Zoro.to, Animelab, Kissanime, and every other streaming website where you can watch anime.

So, what’s the final verdict of this smoldering game between Funimation and VRV? And the winner is……………..VRV!

This is one of the most unique streaming services and has the potential to become one of the best. The platform just needs to do better when it comes to availability and inducing other features like a manga reading platform, its personal store, and a discussion forum. It has most of the qualities of a good streaming platform and in this regard, surpasses those like Funimation.

You can also check out our VRV review to know more about this website. And if you are more interested in Funimation, you should definitely check out our Funimation review where we have made a comprehensive guide to this streaming service.

Funimation or VRV, whatever you choose at the end of the day, you won’t be dissatisfied when it comes to new anime with either of those. Both the apps guarantee the finest collection of anime that are now available at your door.

What do you think you would go for? Let us know in the comments!