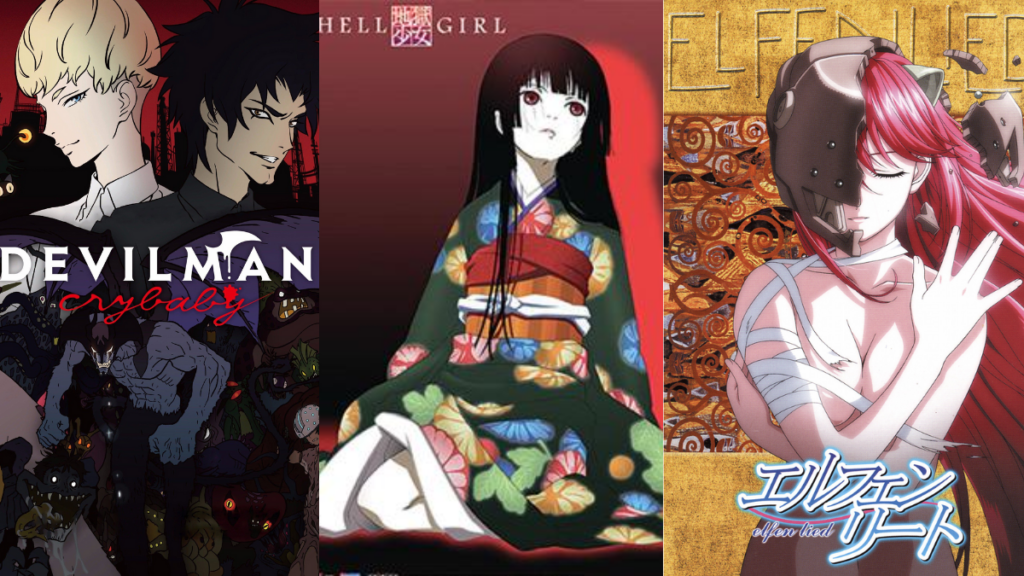 When I started getting into manga and anime, I had no idea about the scope of Japanese animated content, and was quite amused at the sight of so many different genres present in this world! As someone who is fascinated by scary things, I started watching horror anime series. Now fast forward to almost a decade and a half having watched almost all anime in the horror genre I decided to compile this list of best horror anime recommendations for you.

I have categorized all the anime mentioned below from least scary to most scary so you can choose how you wish to torture yourself.

Incase you do not know where to watch these anime here is a list of anime streaming sites that you can go through. The subbed and dubbed versions of these anime are also available on these services so you can watch them without any hassle. Now without further adieu, let us take a look at the top 7 best anime of all time but in the horror genre.

List of 7 scary horror anime that will give you chills

Junji Ito is a very popular name among every horror fan. After all, he is one of the maestros in this genre. The most striking element to his style has to be the touch of macabre and surrealism that brings forth psychological shock that we as viewers experience.

Junji Ito’s work has been adapted into an anthology of 24 short stories in 12 episodes and 2 OVAs, titled the “Junji Ito Collection”. And let me tell you, by the end, you’ll be asking yourself “What the hell was that?” My favorite stories from the collection are, ‘Slug Girl’, ‘Greased’, ‘Souichi’s Convenient Curse”, “Tomie Part 1”, etc.

Junji Ito’s work brings out the true essence of the grotesque and I would definitely recommend every horror nerd to watch this series. The animation is also quite appealing and with every episode, you’ll find yourself losing your way more and more in the strange and violent world of Junji Ito’s horror-cheque.

Devilman Crybaby is one of the latest horror anime that has emerged in the scene. Although it was released in 2018, it has gained a fair chunk of popularity in only 3 years. This anime was released in collaboration with Netflix. It is an interpretation of the original 70s anime, the Devilman series.

However, this new short re-imagination of the story also re-tells real-life stories of adolescence, sexuality, love, LGBTQIA+ identity, racism, classism, etc. It is quite an impressive take on Biblical connotations that is executed through an equally captivating plotline.

It is the story of love, loss, pain, sadness, friendship, heartbreak, and the terrible toll of human prejudice. The animation style is strikingly different from your usual “anime-styled” visualizations. A lot of you might be into this change of style and some of you might not. But I would say that it is worth the watch nonetheless.

This splendid take on a classic horror anime is worthy of being mentioned. I enjoyed it, although initially, I was not too convinced by the potential of a Netflix original anime. However, I decided to look past my assumptions and watch it anyway, and boy, was I proved wrong harshly! It is gut-wrenching, yet reminds us of a very important message.

This is another anime where I definitely shed a tear or two. Elfen Lied has to be one of the very first horror anime that I watched and it has struck a chord inside me ever since. I watched Elfen Lied when I was 18, and the explicit tones of the anime were surely shocking. However, the story combines elements from sci-fi and horror to create a spectacular painting that evokes so many emotions.

The plot tells the story of humanoid species “Diclonius”, and their telepathic and telekinetic abilities are what sets them apart from humans. They are recognized by cat-like horns on their heads and pink/red hair. They are separated from the rest of humanity in the special laboratory, where they are experimented upon, isolated, and then killed. Then one of them escapes…

Apart from the occasional ecchi content, explicit nudity, gore, and violence, Elfen Lied addresses a lot of real-life stigmas like abuse, assault, harassment of women, and the plight of those different from the rest. Elfen Lied’s story is heart-breaking yet it expresses the same in an explicit and triggering way. So, if you are someone who cannot take thrown-at-your-face violence, I’d rather you look before you leap. But if you do decide to watch it, I’m sure you will definitely enjoy this 2000’s horror anime.

This 2000’s anime is one of the most sought-after titles in the horror genre. It derives its inspiration from the Shinto and Buddhist mythology of the kami (gods or spirits) receiving a worshipper’s messages and granting them their wish.

This element of dark fantasy is expressed in an engrossing yet triggering way, as we see the emotions of hatred and revenge blind human beings and damn them to hell (quite literally). The story’s center plot point is the Hell Correspondence website, where if you write someone’s name you truly hate, Ai Enma, an underworld spirit, drags them to Hell. However, in exchange, you have to sell your soul to Enma, who will take you down to hell upon your death.

Hell Girl or Jigoku no Shoujo is a chilling horror anime that keeps you on your toes and bombards you with sudden shocks when you least expect it. It is one of the best anime that I’ve ever watched in this genre and I recommend everyone watch it.

This horror anime is extremely violent and portrays explicit bloodshed and deaths. However, the core theme of the Higurashi story remains intact, keeping its creepy aftertaste alive. It threw me down a spiral as I tried my best to fight the unending twists and turns in the story.

Higurashi has been a pretty engrossing watch although it freaked me out quite a bit at certain points. But all the goosebumps were definitely a reminder of the fact that Japanese horror remains to be one of the best styles of horror in the world.

Another is one of the relatively new horror anime that has come out in the 21st century. And due to this fact, it incorporates a lot of refreshing themes and plot devices in its story. More than the horror, the psychological aspect of the story is what hit my nerves.

The story is quite plain when it comes to the overall plot, as compared to several other bangers in this anime genre. However, the predictability is what gives it that unique touch, as by the end you won’t be sure whether you watched the same series you started with. And this is what I feel, makes Another worth the watch, even though your verdict at the end is a NAY.

Another is creepy more so than horrific. The psychological elements only add an edgy twist to this otherwise neatly violent murder mystery. I would recommend every horror anime fan watch it once!

Last but not least is Corpse Party: Tortured Souls, and its sheer depiction of explicit gore that make it one of the scariest horror anime ever. However, this anime has also been adapted from the celebrated game series of the same, just like Higurashi. It is a survival horror game, that is set in the Heavenly Host Elementary school, which is haunted by the vengeful spirits of people who have been trapped there. The players have to fight the girl in a red dress, the ghost of an ex-student who is the main antagonist.

The 4-episode anime OVA series is based on this story and is worth the watch. However, it is quite violent so I am putting up a trigger warning. It shows explicit scenes of murder, bloodshed, and other visually horrific scenes. But it is worth watching if you are not squeamish or bothered by that stuff.

As a horror fan who also loves gore and darker themes, I truly enjoyed Corpse Party: Tortured Souls to the fullest. The series may not be too big but it makes up in quality and content.

And when it comes to anime, the scope of genres is unlimited. You can find so many categories in anime like Samurai anime, comedy anime, thriller anime, romance anime, detective anime, soccer anime, tennis anime, music anime, etc. So your needs are always satisfied no matter what you’re in the mood to watch. And if you are a newbie to this world, you can check out our article on what is anime, to help you give a comprehensive idea of this vast and colorful world and the contemporary scene.

Did you find these horror anime recommendations useful? Let us know in the comments!