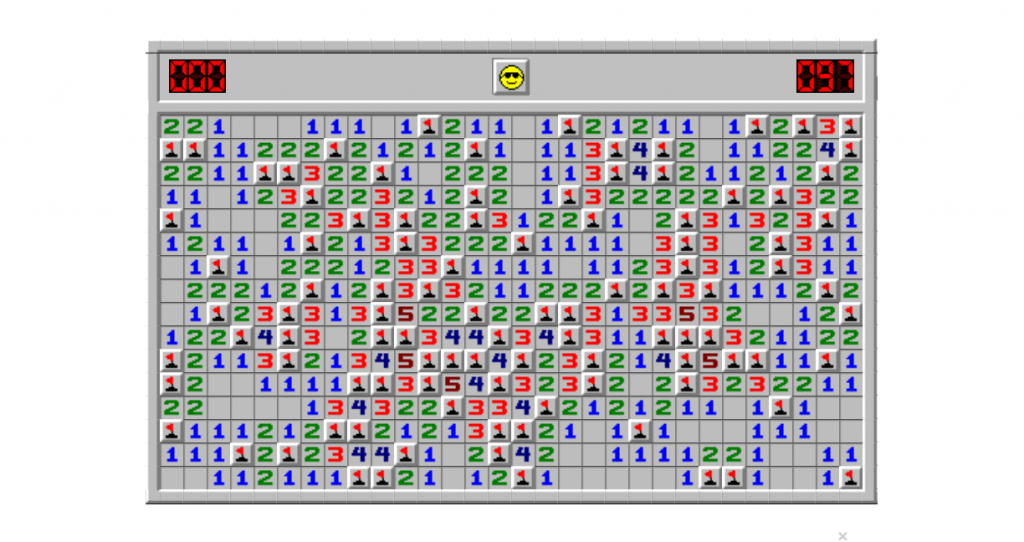 Minesweeper is a very popular game for Windows users, it is a good exercise for your mind when you take a break from your work. Initially, users find it very confusing to play Minesweeper, so before you decide to quit the game and lose out on something intriguing take a look at this complete guide and learn how to play Minesweeper.

The first thing you need to get familiar in the one rule of the game, i.e. the number on a block denotes the number of mines adjacent to it and your task is to flag all the mines.

Some terminologies of Minesweeper you should to know:

Now that you are familiar with all the terms let us learn how to play the game.

Step 1: Finding Your First Mine

To find your first mine you can click at any random place so as to get familiar with the game. You will most likely find characters as seen in the above screenshot. And as we already know the rule of the game that states, “the number is the mines adjacent to the block.” So let us study the case of the above screenshot.  You will notice that it has 1 mine adjacent to it and only one unopened block is there beside it. Meaning that it is definitely a mine. Right-click it to Flag it. Congrats! You have just found your first mine. Do the same with others. If you find a  block with 2 it means it has only two unopened mines, flag the unopened ones, and use to the same process on other numbers (if you find 8, you are one of the luckiest Minesweeper players.)

Step 2: Clearing the Other

Now you need to clean up the other blocks. Block A (see the screenshot) already has a mine beside it. So it is not possible for another mine to be adjacent to it. Hence, the mine on the bottom left can be cleaned.

In several instances, during the game, you will have to make an instinctive move. I have noticed that you will be forced to make an instinctive move mostly when the game is in its latter stages. Study the case of this screenshot. You can see that only 1 Mine is left and it has to be near the ‘3’s in any of the blocks. So the ideal move to play here is to open the block that is not common to either of the blocks marked with orange on the image and you will be able to find the mine.

Try out this step only after playing Minesweeper on at least 5 to 6 beginner fields.  This technique called the 1-2 pattern almost guarantees a win on Minesweeper. Look at the above image, it shows the 1-2 facing a wall (of blocks). Here, it is possible to clear out the block next to one (not in the common field!). This technique is very good to have in your arsenal while playing advanced and intermediate levels. Always ask yourself whether there is a mine in the block that needs to be cleared, will the 1 and 2 be satisfied?

You will run into a similar situation (As seen in the above screenshot) a majority of times. In this screenshot, you can see a mine is present in either of the blocks marked in orange. The blue block is safe thus you can open the blue block. Answer this question in the comments section, what happens if a mine is placed in the blue block, will it satisfy the 1s?

To summarize the entire guide: