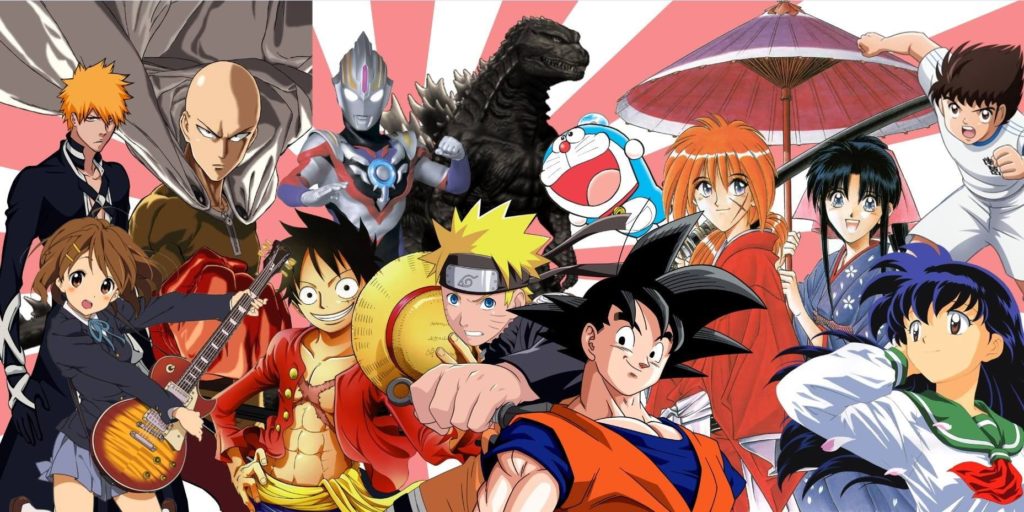 If you have been a follower of our website, we do not need to tell you what “anime” is. Geeky Mint has been writing about anime, manga, and all that jazz for a while now and it has pretty much been established how much we are in love with these popular forms of Japanese entertainment now. In case, you are a newbie to our website, let us tell you what anime is actually.

“Anime” is a Japanese term for animation and refers to the animated shows, series, and movies that are created exclusively in Japan. Most of these anime are based on manga or Japanese visual novels and comics and are a popular source of entertainment for the Japanese people and right now, all over the world. Japanese anime come in the form of long shows, short series, and movies. In the 21st century, anime and manga are at the height of their popularity with more and more people turning towards them as their daily dose of entertainment, every day. You can watch these Japanese anime at various anime streaming websites in English subbed and dubbed versions. Some of these popular websites include Crunchyroll, Funimation, Hidive, etc.

In this article, I will be introducing you to some of the highest-grossing and popular Japanese anime to help you get into their world. And I’m sure you’re going to love all of them. So let’s not waste any more time and follow this anime veteran on a fantastic journey through the world of Japanese anime!

Best Japanese Anime of all time

Plot: The plot of this relatively new Japanese anime is set in a fictional version of New York City named “NC 1978” where individuals with superpowers named NEXT started appearing 45 years ago before the start of the series. Some of these beings even became superheroes. The story focuses on veteran hero Kotetsu T. Kaburagi a.k.a. Wild Tiger and his new partner Barnaby Brooks Jr. who possesses the same power as the former. However, the two men often clash due to their differing views on how a superhero should act while at the same time trying to figure out the mystery behind the murder of Barnaby’s parents. Additionally, they are also trying to fight against a homicidal vigilante NEXT named “Lunatic”

Review: Tiger and Bunny is one of the top 10 anime in Japan and has been one of the highest-grossing Japanese anime since the day of its release. It is action-packed and highly entertaining that will definitely fill you up with adrenaline. I would highly recommend you check out this Japanese anime series at least once.

Plot: This Japanese anime is definitely a trip down memory lane for me. I remember being into it as a kid when it used to come on Animax. Cardcaptor Sakura is a Shoujo anime about a magical Japanese anime girl that is set in the fictional town of Tomoeda which is located somewhere near Tokyo, Japan. It revolves around the life of ten-year-old Sakura Kinomoto who accidentally sets off a set of magical cards known as Clow Cards from a book in her basement created by a sorcerer called Clow Reed. These cards can take on an alternate form when activated. Cerberus or Kero, the guardian of the card emerges from the book and reveals to Sakura that only someone with magical powers can release the seal of the book, thus hinting towards the latter’s own magical powers. Thus begins the girl’s journey towards retrieving the missing cards.

Review: Cardcaptor Sakura is an enchanting show that I thoroughly enjoyed as a child. However, older anime fans will enjoy it too especially if you are into witch anime. I would totally recommend fans of genres like fantasy and supernatural to definitely check out this famous Japanese anime.

Plot: The story of this anime is set in an alternate-history late Edo period in Japan, where humanity has been oppressed by aliens known as the “Amanto” or the “Sky People”. In such a scenario, the Shogun has surrendered while his henchmen, the samurai fight to defend Earth. However, due to a contract between the Shogun and the aliens, the samurais are now banned from carrying a sword in public and the invaders can roam freely on Earth. The Tokugawa shogunate remains to be a puppet government under the authority of the Amanto. Gintoki Sakata is one such rogue samurai, who after losing his position as one, has taken to doing odd jobs for people all across the town of Kabuki-Cho. Together with odd-jobs freelancer Shinpachi Shimura and Kagura, a runaway alien girl, they take on various jobs and fight a lot of enemies along the way. They also constantly get into trouble with the Shinsengumi police force, with whom they have a frenemy-like relationship.

Review: Gin Tama has perfectly fictionalized the horrors faced by Japan after the fall of the Tokugawa Bafuku and the Meiji Restoration in 1868. It borrows ideas from real history, while at the same time entertaining the audience to the max. Gin-san, Shinachi, and Kagura’s shenanigans are known all around and the trio will definitely take you on an adrenaline-inducing and rather hilarious adventure throughout the anime.

Plot: Fullmetal Alchemist: Brotherhood is one of Japan’s most popular anime to date. It is based on the manga “Hagane no Renkinjitsushi” by Hiromu Arakawa and narrates a compressed version of the same. The plot centers around brothers Edward and Alphonse Elric who are raised by their mother Trisha Elric in the remote village of Rensembool in the country of Amestris. Their father, Hohenheim, a gifted and noteworthy alchemist is not in the picture and has been gone for a long time for some “secret project”. Following their estranged father’s footsteps, the two brothers pick up on alchemy and show considerable aptitude for the same. However, after Trisha’s untimely death due to a sudden illness, the brothers try to bring her back through alchemy. But this endeavor goes horribly wrong and Alphonse ends up losing his body while Edward sacrifices an arm and a leg to get back his soul and trap it in huge metal armor. They are taken in by their neighbor and childhood companion, Windy Rockbell, and her grandmother who gives Edward a pair of automail prosthetics for his missing arm and leg. However, the brothers are set on finding the Philosopher’s Stone, the ultimate alchemic object that would bring back Alphonse’s body and Ed’s hand and leg. Hence, begins their journey full of obstacles while unraveling secrets along the way.

Review: Fullmetal Alchemist: Brotherhood has been one of my very favorites since the first time I watched it. It is very different from your typical Shounen anime and paints a very offbeat yet gripping story. I would highly recommend all Japanese anime fans to check out this gem.

Plot: The story of this Japanese anime is set in the year 2015, fifteen years after a global cataclysm named Second Impact ravaged the planet. The protagonist of the story is a teenage boy named Shinji Ikari, who has been summoned to the futuristic city of Tokyo-3 by his long-lost father Gendo Ikari who is also the director of the special paramilitary force named Nerv. After being forced by his father to pilot an Evangelion, Shinji is gravely injured and humiliated in battle. Henceforth, he decides to get better as a pilot and defeat Angels while at the same time also facing his personal demons.

Review: Neon Genesis Evangelion is a classic Japanese anime that is available on Netflix. It is definitely worth the watch and not to mention that it has been critically acclaimed time and again. Every anime fan should definitely watch this anime as it is a class apart and remains to be one of the greatest texts of fiction to date.

Plot: Dragon Ball Z is probably one of the most popular Japanese anime of all time. Based on the story by Akira Toriyama, it is the sequel to the Dragon Ball anime of 1986 and covers most of the arcs in the second half of the manga, spanning over 325 chapters. It picks up five years after the end of the original Dragon Ball anime and this time also features Gohan, Goku’s son as one of the protagonists. The story is divided into 5 sagas namely the Saiyan Saga, Frieza Saga, Garlic Jr. Saga, Androids Saga, and Majin Buu Saga. Goku and the company’s journey is chronicled throughout this action-packed, adrenaline-inducing sequel.

Review: I remember watching Dragon Ball Z back when it used to air on Cartoon Network for a very short period of time. Needless to say, it is definitely a nostalgic trip for me that I enjoy thoroughly every time I experience it. And I’m sure a lot of fans will share my feelings on this.

Plot: The anime narrates the tale of Monkey D. Luffy, a simple man-made of rubber who has set out on a journey from the East Blue Sea to find the mythical treasure named One Piece, inspired by his idol, the powerful Pirate “Red-Haired” Shanks. By finding the treasure he also seeks to proclaim himself as the King of the Pirates. Eventually, he gathers his own crew by rescuing and recruiting a pirate hunter and swordsman named Roronoa Zoro and the duo set off to look for the titular treasure. Eventually, they are joined by other members, a thief and navigator named Nami, a sniper named Usopp who is also a compulsive liar, and a chivalrous yet perverted chef named Sanji. Along their journey t realize their goal, they meet notorious enemies and many other obstacles which they have to overcome and move forward.

Review: Running at about 1000 episodes, One Piece is one of the longest-running anime. However, fans are speculating that the end of the series is near and they definitely cannot wait for it. One Piece is one of the greatest anime ever created and every anime lover should make the commitment to watch it at least once in their lives.

Japanese anime has gained a lot of popularity in recent days. With more and more people getting into the world of manga and anime, it has stood out to be one of the most common forms of visual entertainment in the last couple of decades. Even the countries where it was not so popular before, have seen a surge in the number of its population who watch anime in their leisure time.

What is your favourite Japanese anime? Drop their names in the comments!