How to solve Modern Warfare crashing issue on PC

Modern Warfare crashed on PC, this is an issue which currently every Call of Duty: Modern Warfare player is experiencing on their PC. There is nothing more annoying for a PC gamer than to die in combat due to Dev error code like Fatal Error: Dev Error 6178 or no error codes at all.

There are cases reported where Call of Duty: Modern Warfare has crashed even in single-player mode. If the Modern Warfare game continues crashing on your PC multiple times then try out these few steps to get rid of the error.

First and foremost, crashes on the game Modern Warfare can occur due to hardware requirements, so you will have to check if your PC is compatible and satisfies the minimum or recommended requirements, Also check for further recommendations, for instance, if you have high graphics settings like Ray Tracing enabled.

It is very difficult to find the exact cause for CoD: MW crashing but these are the most likely causes for the error occurring.

Below are different fixes you can try out to solve the crashing issue faced by Modern Warfare players.

How to Fix Modern Warfare Crashing

The easiest way to avoid Modern Warfare from crashing is to troubleshoot, try it for 3-4 times but in case it does not work try out these other fixes.

Fix 1: Shut down all background Apps

Use this shortcut Ctrl + Shift + Esc while in-game to Shut down all applications that are running in the background. Usually, if you have a background software like antivirus software enabled, it is very over-protective and is a likely cause for Modern Warfare crashing issues.

After it is downloaded, open the driver file and click install.

To set your graphics resolution to Normal or high 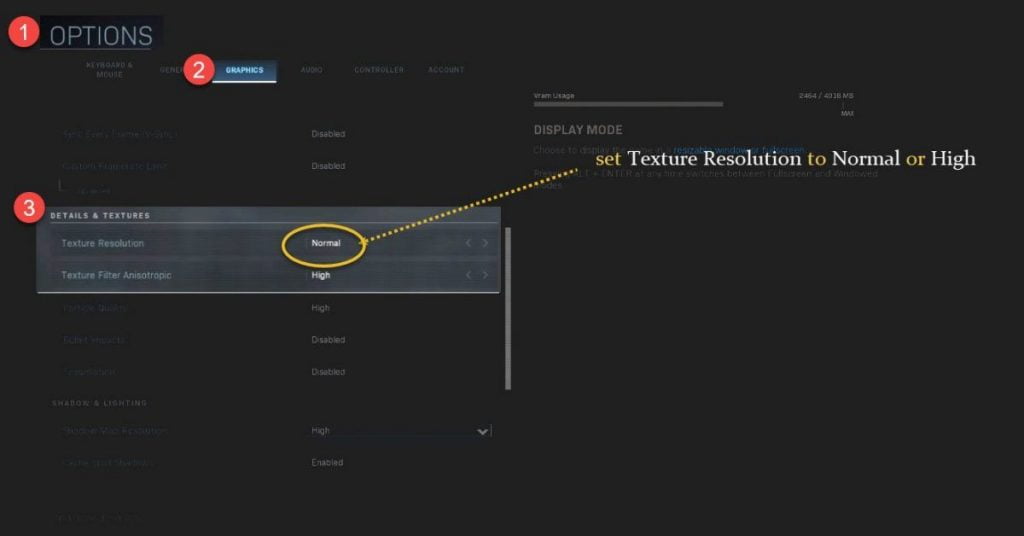 Pro Tip: Only keep Texture Filter Anisotropic High and keep the rest on the lowest settings. Also turn off Sync Every Frame (V-Sync), which is best left off within games.

After changing the Graphic settings play Modern Warfare to see if the issue has subsided.

Fix 4: Scan and Repair your game

There may be some corrupted game files that can be causing your Modern Warfare to crash, you will have to scan your game files to see if there are any corrupt files and have to repair them if any.

If you are using Blizzard Battle.net, locate Modern Warfare and click Options > Scan and Repair.

For Steam users: Right-click Call of Duty: Modern Warfare from your game library and select Properties. Then click the Local Files tab and click Verify Integrity of Game Files.

You may have heard that you can improve your gaming performance by Overclocking your CPU but this can result in an unstable gaming experience, which can be a likely cause for Modern Warfare crashing.

If your Call of Duty: Modern Warfare is crashing after you overclock your GPU, lower it back to the default settings and check if the crashing issue still persists.

Turn off the V-Sync in your game which is G-Sync/FreeSync because there is a possibility it is interfering with Modern Warfare, so switching it off will most likely make the game crashing issue go away.

For those gamers who have in-game V-sync turned on, disable it in Modern Warfare graphics settings.

Here’s how you turn off V-Sync in NVIDIA Control Panel: 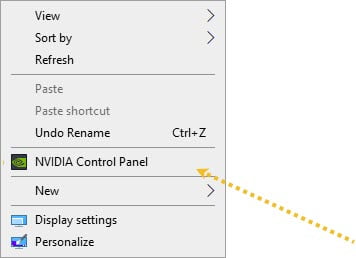 2) On the left panel, go to 3D Settings > Manage 3D settings. Click on the Program Settings tab and add your Call of Duty: Modern Warfare.

3) Click on Off for Vertical sync. Then save the settings by clicking Apply. 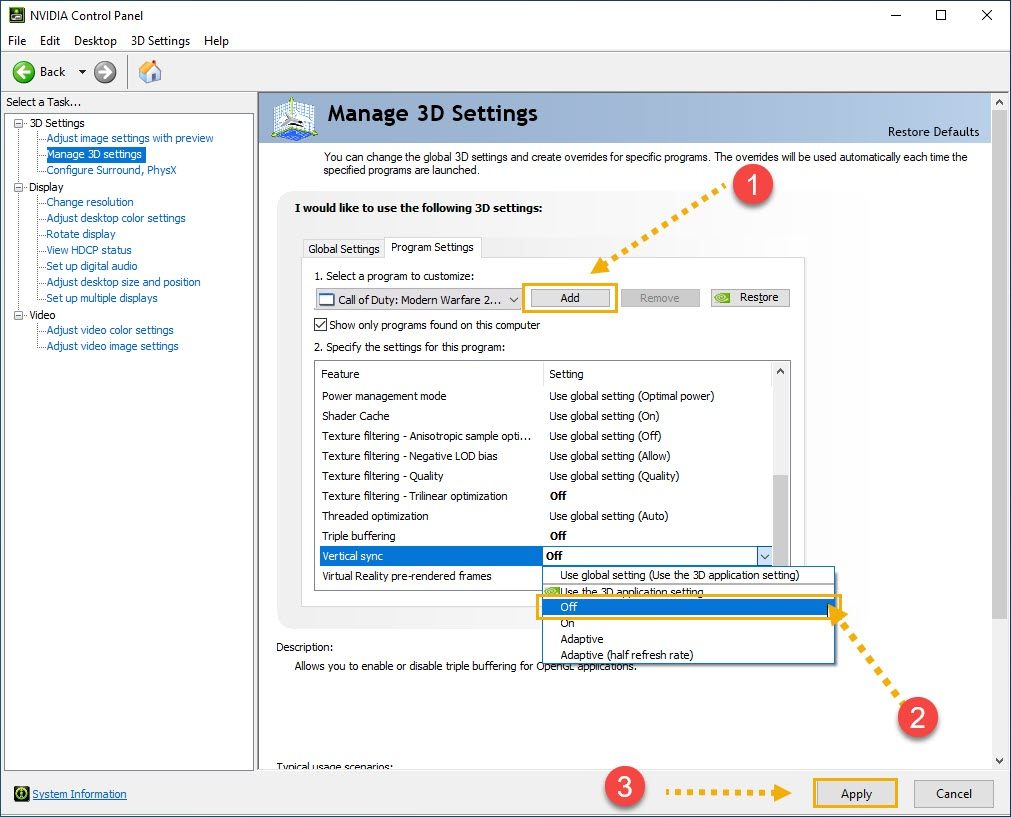 Relaunch Modern Warfare a couple of times to see if the crashing issue has been solved.

Modern Warface can be forced to crash if programs have overlay features like Discord enabled, disable the In-Game Overlay to avoid such crashing issues.

1) Go to Discord and select the settings icon.

2) Hover over the Overlay tab on the left panel.

You also have the option of disabling In-game over for the only Call of Duty: Modern Warfare: Simply search for Games tab and select CoD: Modern Warfare.

I added this Fix after discussing with many gaming experts, they said if you Set Call of Duty: Modern Warfare to high priority it will possibly minimize the crashing. To change priority follow these steps

Step 1: Open Call of Duty: Modern Warfare then go to the task manager.

Step 3: Find Call of Duty: Modern Warfare.exe and right-click it. 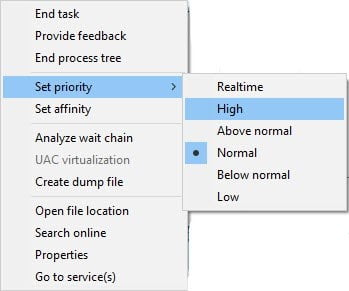 If the problem of Call of Duty: Modern Warfare crashing still persists, you will have to reinstall the game.

But before re-installing the shooting game make sure you clear the roaming and local files.

Clear the roaming and local files with these steps

Step 3: Clear game files in the Local file folder from the AppData folder.

Safdarali Rizvi
Safdarali Rizvi the management graduate. Has been an avid book reader all his life so naturally loves playing with his words. His curiosity for discovering futuristic opportunities drives him to enlighten the entire Geekymint team with exclusive and intriguing news. He has a real passion for calisthenics and sports. His management abilities and hunger for learning brings tremendous value to our team.
Previous articleHow to fix rainbow six siege crashing with 3 different methods
Next articleHow to fix Skyrim not launching issue on windows PC (5 methods)

Modbro was one of the growing movies and live tv streaming sites with free unlimited content. Mobdro had its app on the...
Read more
Apps

Cinema HD apk is one of the best free streaming apps on the internet but every now and then it does not...
Read more
Apps

Movies and tv shows have entertained people since the 1960s. Earlier to that people used to go to fair and circus to...
Read more
Apps

Vudu is a streaming service that originated out of a video retail store owned by Fandango Media in the US. The company...
Read more

Wiring Issues Could Push-Back The Return Of The 737MAX

With constant efforts of returning the Boeing 737MAX back into the skies, the company along with the regulators have inspected every aspect of the...
Read more

Many gamers have recently complained about how Rust keeps crashing at startup, or the game directly closes to desktop during gameplay. So here is...
Read more

iPhone set to get a cryptocurrency-focussed browser

Just a few weeks back Opera had announced the launch of its cryptocurrency-oriented browser on Android, and just a couple of days back, the...
Read more

Remember the movie, Wolf of Wall Street, the movie which inspired many to follow their ‘American Dream’, the inspiration behind the movie and whom...
Read more