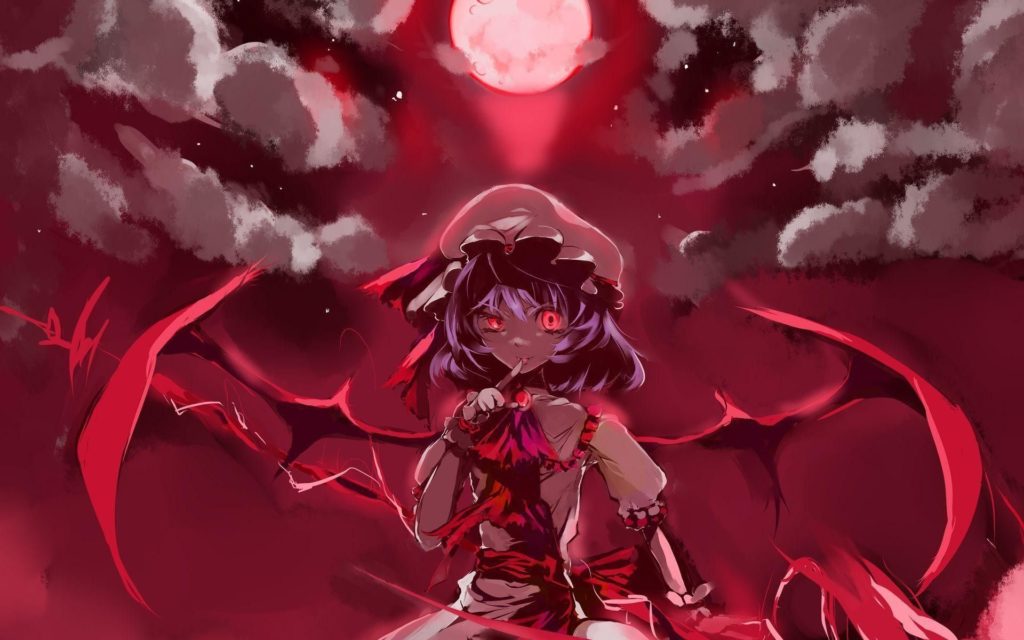 A lot of anime fans who are into genres like horror and supernatural must be quite familiar with vampire anime. These anime typically features vampires as their main characters who are usually given the role of heroes rather than villains contrary to popular myth. Most of these anime, feature strong vampire girls who are just as powerful as the vampire boys in the series, and sometimes even surpass them through abilities.

In this article, I will be introducing you to some of my favorite vampire anime girls who have proven themselves to be exceptionally powerful, charming, and on par with their male counterparts time and again. So, get ready to know some of the best vampire anime girls of all time. And who knows, you might even come to love some of them just as much as I do!

Rima Touya is a vampire anime girl and the youngest nightclub student. She has a creamy pale skin tone like all other Noble vampires and Night Class students, and a beautiful appearance with the light orange hair that she keeps tied in two pigtails. She is strong, self-assured, and assertive, and speaks very little. Although she comes off as aloof she cares deeply about the ones she loves even seen to be worrying about Senri Shiki in certain instances.

Other than possessing accelerated healing powers she can also control and wield electricity and lightning. She also possesses superhuman strength and exceptional speed like all other vampires.

Shinobu Oshino is a female vampire anime character from the series Bakemonogatari. Initially, she was a human child princess named Rola and was cursed into making anyone who came close to her commit suicide. She took on the name of Acerola before meeting a purebred vampire, who turned into a powerful vampire. She is a young girl with yellow eyes, pointed ears, sharp fangs, and long blond hair which curls out at the ends.

She possesses superhuman strength and accelerated speed as a vampire. She also has special abilities like healing and regeneration, shapeshifting, and shadow melding. She can also drain the energy of her opponents and is also known to be able to travel in time.

She is one of the prettiest vampire anime females and the protagonist of the anime Vampire Knight. She is an ex-student and Guardian of Cross Academy. Yuki Cross/Kuran is a petite and slim girl with chestnut brown hair and big brown eyes. She is cheerful, caring, and rather comical always donning a huge smile on her face.

Moka Akashiya is a vampire anime woman from the romance anime series Rosario + Vampire. She is one of the main characters of the series and the girlfriend of Tsukune. Moka is known to be one of the most beautiful vampire anime girls in the series. The Outer Moka is a tall woman with knee-length pink hair, green eyes, and full pink lips. In her vampire form, she has sharp fangs, her hair changes colors to silver and her eyes give off a demonic streak. She also has red irises with split pupils in this form.

When Moka turns into a vampire, she also gains superhuman strength, speed, and agile reflexes. She also attains regenerative powers and immense stamina. She can detect the presence of other monsters by sensing their demonic aura. She is also immensely durable in this form and can form ‘Blood Links’ with humans (Tsukune in this case) by injecting them with her Shinso blood. She also possesses the power of flight and telepathy. She also possesses an ability called ‘Creation’ which she uses to create a jet-black stell suit of protective armor.

She is a woman vampire anime character and is one of the main protagonists of the Hellsing series. She was turned into a vampire by anime vampire boy (insert link) Alucard. She is an attractive vampire anime female with blond hair and blue eyes. She is broad-shouldered and has a voluptuous figure and is shorter than all her other fellow vampires. She has a strong-willed personality and a brave, strong, and valiant woman who also has a wild temper.

She possesses superhuman strength and accelerated speed like other vampires. She also has an ability called the ‘Third Eye’ which gives her the power of clairvoyance. She can also regenerate quickly and absorb souls. After drinking Pip’s blood, her powers are enhanced and she gains new abilities like ‘Dark Composition’, ‘Familiar Control’, enhanced endurance, resistance, and also the ability to fly.

Saya Otonashi is a strong girl vampire anime character and the main protagonist of the series Blood+. She is a rosy-cheeked short high school girl who has black hair and brown eyes. Back in the zoo, she used to have long hair till the waist which she styled with bangs. In her Chiropteran form, her eyes grow narrower and emit a bright red glow and her lips become darker. Her pupils turn into slits and her nails grow sharp and long.

She is exceptionally skilled at fencing, music, and athletics. She also possesses extreme strength, accelerated speed, telepathy, and regenerative powers. She can also perform clean high jumps as a Chiropteran and has anti-aging powers. She can produce chevaliers and can go into ‘Berserker Mode’ where she becomes more violent and aggressive. She also possesses a katana which she uses to hunt Chiropterans.

This cute anime girl vampire is one of the main characters of Interviews with Monster Girls. She appears as a petite girl with shoulder-length hair that is similar to bat ears and golden eyes. She is cheerful, full of energy, and an overall gleeful character in contrast to how vampire girls are usually portrayed in anime.

She is an atypical vampire without any physical or mental abilities. She avoids drinking the blood of human beings and enjoys garlic, something that vampires usually despise according to myth. She is extremely helpful towards others and drinks blood packs sent by the government.

Anime vampire females have been typically portrayed in anime as either being very powerful with cold and aloof personalities or being warm and kind-hearted creatures who have many human-like qualities. But regardless, they also possess a personality that is in stark contrast to what they are typically portrayed as. I have listed some of my favorite anime vampire women in this article. I love these characters for their characterization in the story as well as their strong-willed nature and resilience against all atrocities.

Who is your favorite vampire anime girl? Let us know in the comments!