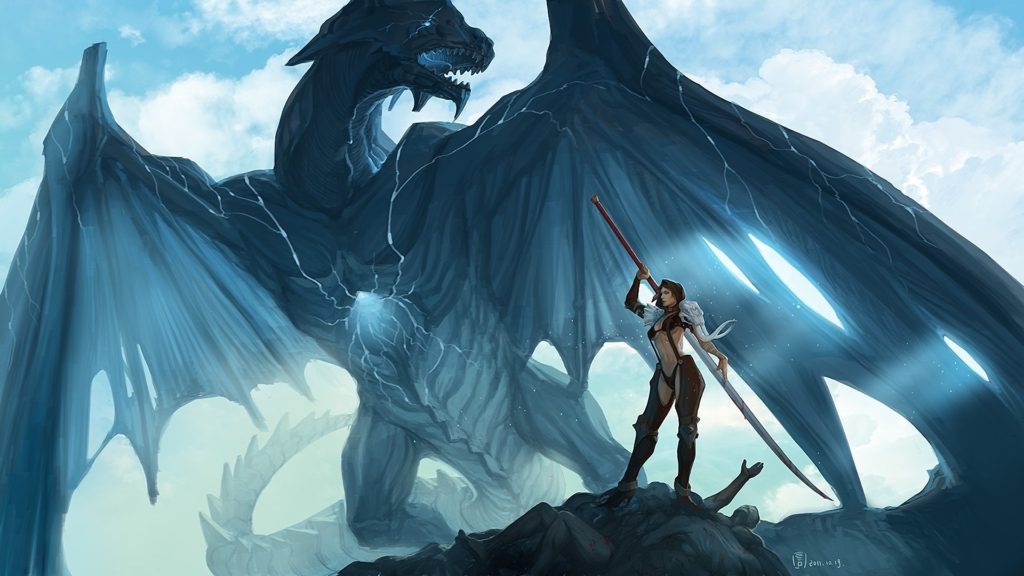 If you are into mythology like me, you have definitely come across “dragons”. Dragons are creatures present in the folklore of various cultures as humungous, serpentine fire-breathing creatures. They vary in appearance from different cultures. The concept of these dragons has been used in various manga and anime. There are also a number of books based around the theme of this legendary creature.

In this article, I will be taking you through some of the well-known dragon anime that you can watch if you are a mythology and fantasy nerd like me. I will be jotting down what you can expect from these anime and giving you a glimpse of the plot in this dragon anime series list. You can watch these anime on any streaming platform with English subtitles and in English dubbed versions. You can also catch some of their mangas on manga reader apps and manga reading sites.

So, buckle up and get ready to dive into the mystical world of dragons in anime!

Dragon Ball is an anime with one of the strongest anime dragons – Shen Ron. It narrates the story of Goku who meets Bulma and together they set out on the quest of collecting the seven Dragon Balls. Upon collection of the seven dragon balls, Shen Ron appears and grants the summoner one divine wish. It is one of the best dragon anime with dragons, magic, and aliens.

Dragon Ball is an anime with some of the best character development arcs, plotlines, and themes. It is one of the legendary anime with the manga having written by Akira Toriyama, an equally legendary mangaka. If you want to figure out where to start with this series, you can check out our Dragon Ball watch order. The Dragon Ball anime also has various sequels and movies that you should check out.

Another popular series Fairy Tail has some of the best dragons in anime. Also, I absolutely love how this anime mixes the concept of dragons and magic. It has Igneel who is a red dragon in this anime and hosts his foster son Natsu Dragneel’s soul. However, although not present physically, he still has an influence over his foster son, and sometimes manifests through him during the latter’s fights.

Fairy is one of the best dragon anime that has powerful dragons like Igneel, Grandeeney, Metalicana, and others. Fairy Tail is one of my favorite dragon anime which is packed with action, humor, and emotions. There are characters you will love and those with whom you’ll grow to sympathize. But either way, I would say that this anime is worth watching for its characters, story, and themes.

Burn The Witch is a witch anime that is set in the Bleach multiverse. Burn the Witch has dragons that pose a danger to London and two girls from the Western Branch of Soul Society, control them. The Wing Bind exists in Reverse London, whose residents are the only ones that can see these Dragons. However, many have tamed some of these Dragons to produce goods and resources.

Since it is from the creator of one of my favorite anime, I love it and would be super happy if they decide to continue with the series. It is indeed one of the best dragon anime and even though it has a few episodes till now, I will recommend you watch it. These two girls fighting dragons in this anime are reminiscent of some Bleach characters. So, Bleach fans watch this anime today!

Blue Dragon is not only an anime with dragon in the name but it actually features a friendly Blue dragon character. I have memories of watching it in my childhood but forgot all about it till I stumbled upon its name which researching for this article on anime about dragons. In this anime, the Blue Dragon is the mascot Shadow that belongs to the protagonist Shu in the Blue Dragon universe.

Although I never got to complete the series from what I remember from memory, the Blue Dragon appeared as a strong and intimidating entity. Shu and the Blue Dragon had a rough start due to the latter’s tendency to rampage before it debuted. The Blue Dragon is extremely powerful when under control and Shu carries that out really well. You will definitely have a good time watching this anime.

This is a sci-fi Dragon anime that is set in a universe where an asteroid headed for Earth destroys Pluto and gets stuck in its Orbit. In order to avoid impending doom, the ISDA is working on the “D-Project” to create weapons known as “Dragons” after finding a dragon egg in the ocean. However, they soon realize that powerful and destructive dragons from the asteroid are set to destroy Earth.

Jin Kamishina, a lonely teenage boy who was orphaned after losing his family in a shuttle accident two years prior. He gets involved with the ISDA to help save the Earth from the asteroid and is joined by an enigmatic girl who saves him from dying after being attacked by one such evil dragon. Dragonaut: The Resonance is a pretty good dragon anime for all those who want to get into this genre. I enjoyed it thoroughly, to say the least, and would watch it again. Check out this show while you’re at it!

This is a dragon anime available on Netflix which has been released as a part of the streaming service’s ONA anime with themes surrounding Dark fantasy. It is based on a video game of the same name developed by Capcom. It is set in the fantasy world of Gransys where the player is assigned the role of a human protagonist. His name is Arisen and he is on a quest to defeat the mighty dragon Grigori who has been prophecized to bring the world’s end. As a side-quest, he will also be unraveling a conspiracy along the way.

Gamers, attention! If you have played this video game you should totally check out the series as well. Although I haven’t played the game, I thoroughly enjoyed the series nonetheless. I would urge you to check it out and see for yourself whether you love it or not.

This is a slice-of-life maid dragon Yuri anime that centers around a dragon girl who can transform into a human girl wearing a dragon maid. She ends up accompanying the main protagonist, Kobayashi working as her maid. The lonely dragon finds a home in Kobayashi and quickly ends up falling in love with her.

Soon it is revealed that Tohru the dragon girl is actually an exiled creature from the otherworld and has been seeking shelter on Earth ever since. All this is revealed by Kanna who has come to take her home. With Kanna and Kobayashi. Tohru starts an alternate life on Earth. This is a sweet fantasy slice-of-life series that will definitely warm up your heart this winter. I would recommend you watch this dragon anime and see for yourself whether you fall in love with the characters or not.

Just like some dragon anime are typically regarding dragons or center around that theme, some have dragons as side characters. So, although there is no particular listed genre called ‘dragon anime’, you can still search on Google using these keywords to get more recommendations. I hope this listicle helps you massively if you are trying to get into this genre. There are many other dragon-related and dragon-themed anime that you can check out. You can watch all these anime on anime streaming sites like Crunchyroll, Hidive, Funimation, etc.

Can you recommend a few other dragon anime? Let us know in the comments!