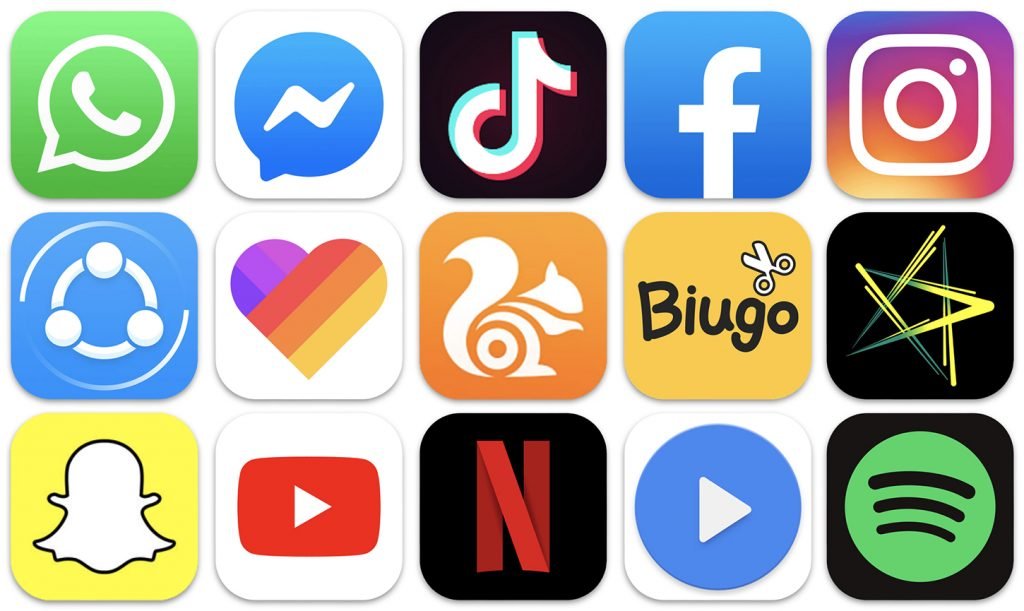 What would life be without apps? Hard to even imagine it, Arguably the backbone of any mobile phone, An App is what makes it so valuable. There is literally an app for every other thing to do from finding your soulmate, connecting with your friends, watching movies, checking your health rate, making payments you name it and you will find an app for it. And if you do not find an app on the PlayStore or App Store you can find third-party apps on the internet in the form of app apk links.

Experts have forecasted that the global app economy will reach $6.3 trillion by the second quarter of 2021 and it is no surprise.

Citing a report published by Sensor Tower, I have listed below the top 20 most downloaded apps in 2019. This list is dominated by the bigger well-established ventures with a few surprise entrants. It will be quite interesting to see if in 2020 the big players can maintain their positions or the newer players will dethrone them.

The Dark horses of the App Economy

As per Sensor Tower in 2019 there were total app downloads of 115 billion, of which 31 billion and 84 billion downloads came from the App Store and Google PlayStore respectively.

As seen by the infamous strategy of Facebook of acquiring its competitors, it is no surprise that the social media giant owns four out of the top five of the most downloaded apps in 2019 namely Facebook, Facebook Messenger, WhatsApp, and Instagram.

For the fourth year in a row, Whatsapp holds the top spot as the most downloaded app in 2019.

A new entrant in the top 10 was Likee, the short-video app which made it to the sixth spot in the list of the most downloaded apps in 2019. Significantly, 330 million downloads of the app were from India.

Likee is a direct competitor to TikTok, the lip-synching app which has grown immensely popular.  TikTok first made it to the top 10 most downloaded apps in 2018 and currently it is competing with Whatsapp for the top spot.

Which Apps are growing more profitable?

Just like most of the social media apps which transform users into viral sensations, TikTok emerged as a new contender for doing the same. The second most downloaded app in 2019 grossed a massive $177 million multiplying on its 2018 gross profit by 5 times. The viral short-video app also shattered Facebook’s foothold on the top four apps of the world and took the second spot.

Netflix was the only streaming app in the list of the top 20 most downloaded apps in 2019.

For years, Netflix sat at the spot as the most downloaded streaming service app, however, the launch of the Disney+ has challenged the streaming apps position.

Disney+ was launched in November 2019  and yet managed to generate a staggering $50 million in revenue which is a really challenging sign for Netflix.

Within a span of three months, Disney+ acquired 34% of all streaming app downloads or roughly 30 million subscribers which are half of Netflix’s current 60 million U.S. subscribers. It also outranked Hulu and Amazon Prime in the list of leading streaming apps downloaded in 2019.

Gaming apps are arguably the most likely candidates to break into the top 20 most downloaded apps list in 2020. In 2919, mobile gaming quickly surged with 2.4 billion people playing games on their mobile phones. PUBG has already made its name as the most popular gaming app and the latest entries of two popular console franchises, Call of Duty and Mario Kart show that there are big things to be expected of gaming apps in 2020.

You can also download and run mobile games on your computer by installing an android emulator.

Which country had the most app downloads in 2019 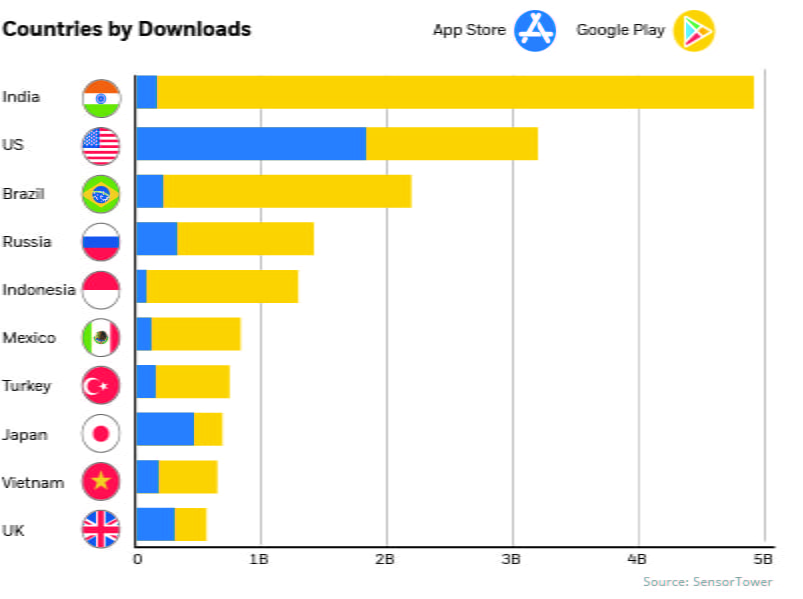 With the introduction of 5g networks and reasonably priced smartphones in the younger population filled countries like India, China, Russia, Brazil the app economy is witnessing a surge in downloads and revenue.

With a population of 1.3 billion of which a majority are under the age of 25, it is no surprise that India had to be on this list. TikTok app particularly enjoyed the most as India was its biggest market in 2019. 45% of Tiktok’s first-time downloads in 2019 came from India.

The introduction of revolutionary Blockchain technology augmented reality and easy payment methods amongst the many innovation possibilities as well as the increasing consumer purchasing power are all positive signs for the growing app market which is still in its early stages.

Speaking on the growth of the app market, the EVP of Global Marketing & Market Insights at App Annie, Danielle Levitas said, “Consumers spent $101 billion on apps globally in 2018. This is double the size of the global sneaker market and nearly three times the size of the oral care industry.”

The market for apps is on a quick march to becoming a trillion-dollar market as the app market has emerged as a growing prospect for quick monetization. Mobile commerce, advertising, and rising consumer purchasing power are the main ways for the rise of the app market.

Just when experts had predicted that the margin for monetization in the app market will gradually decrease through recent innovations and a surge in demand for mobile apps shows that the app market is on the rise in 2020.

How many screens can I watch Hulu simultaneously?

Bitcoin and Ethereum: Trends, Development, and the Future of Cryptocurrency