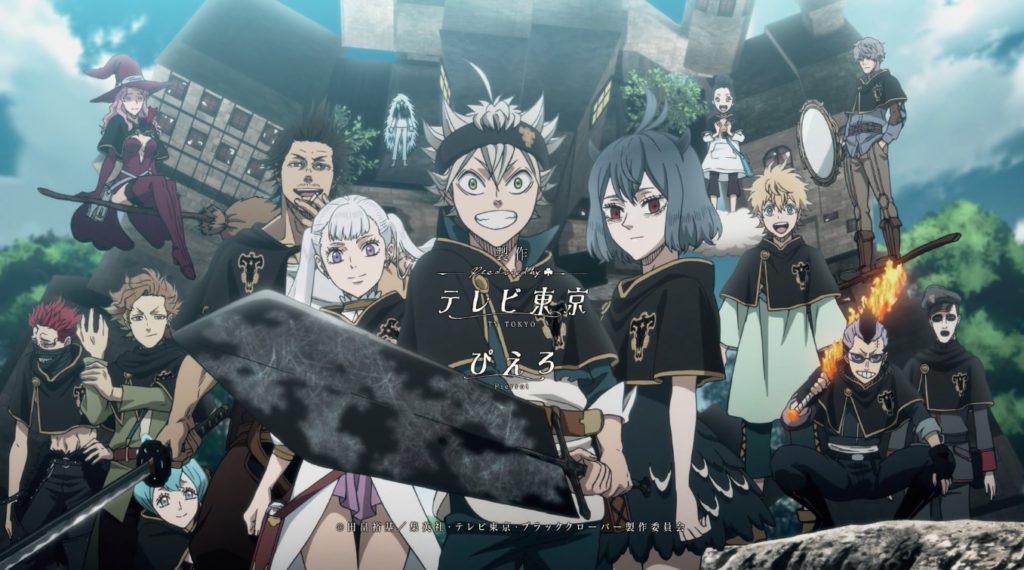 Black Clover is one of the most popular anime that stole the hearts of anime fans globally when it was released in 2017. I remember watching it on Animax and not to mention, I was instantly blown away. The storyline, the plot, the characters, and their personal arcs, everything was extremely engrossing and kept me on my toes till the last episode.

This anime tells the story of a young boy named Asta who was born without magical powers in a world that uses Mana in the form of magic. However, Asta does not possess this ability and only relies on his physical prowess (does this plot remind you of some other anime? *wink* *wink*). Asta’s friend Yuno on the other hand is a prodigy and has the power to control wind magic. Does begins their friendly rivalry to take over the throne of the next Wizard King.

Black Clover is an exciting anime that is visually pleasing and uses elements of supernatural and fantasy to narrate its story. It is also a story of friendship, love, loss, heartbreak, pain, and the struggle of overcoming your own weaknesses. This is an anime definitely worth checking out. It is also an ongoing anime and if you want to get into this anime, I have the perfect Black Clover watch order guide for you to help you kickstart with the series!

So, put on your seatbelts and get ready to know more about this series in this Black Clover watch order guide.

How to Watch Black Clover in Proper Order of Release

This special OVA comes first in our Black Clover watch order 2021. This video animation was the first adaptation of the Black Clover manga that came out in 2016, a year before the original anime TV series was released. It was produced by Xebec, Inc. And broadcasted at Jump Special Anime Festa 2016. Later on, when Volume 11 came out, it was included as a special copy. The OVA mainly deals with the Grimoire Acceptance Ceremony story and the two major fights that feature in the OVA are Klaus Lunettes and Yuno vs. Mars and Asta vs. Revchi Salik.

This OVA pretty much lays down the foundation for the Black Clover anime series that would eventually release the next year and gives fans a teaser for what’s to come. I loved it and it really pumped me up for the upcoming series.

This is the first season of the Black Clover anime series that appears in our Black Clover watch order guide. This season covers the first nine volumes of the manga except episode 13 which has an anime-exclusive storyline and episode 29 which is a recap of the events that have already taken place. The series follows the adventures and journeys of Asta and the Black Bulls in the kingdom of Clover.

This season is quite happening and we come to know of a lot of the events which will eventually be resolved in the later seasons. It also establishes the anime as entertaining with lots of aggressive fight sequences and emotionally packed scenes.

Season 2 of this fantastic anime appears next in our Black Clover watch order guide. This season takes off from where the last season left off and covers almost all arcs till the 17th volume of the original manga series by Yuki Tabata. However, episodes 55 and 56 are slightly different from the manga and are based on Tabata and Johnny Onda’s light novel for the franchise, The Book of the Black Bulls. At the same time, episode 66 is a recap, and episodes 82, 85, and 86 are fillers. This season mainly deals with the Black Bulls entering the Forest of Witches and healing Asta’s arms which were heavily injured in his battle with the Eye of the Midnight Sun in the previous season.

This is also quite a thrilling season as more secrets unravel in front of us and we get a better insight into the inner workings of some of the cliffhangers left off in the last season. This is pretty much hooks you onto the show as you dive into the deeper waters with Asta and company. You can catch the episodes of Black Clover Season 2 in English subbed and dubbed versions on major anime streaming sites.

This Black Clover season covers almost all of the arcs of the 17th volume till the 23rd volume of the original manga series. However, episodes 123 and 124 are a recap of previous events that have already taken place in the series, and episodes 130-154 are anime canon episodes that were personally supervised by Tabata-sensei, the creator of the manga. This season unfolds with Asta coming to realize the truth about his own sword and using his newfound powers to heal his subordinates. Asta and company get into an aggressive battle with the Elves. The series ends with the Bulls and the Magic Knights preparing for an upcoming war.

This season is extremely engrossing and will keep you pumped throughout its course. We come to know of Asta’s sword’s true potential and also a lot of secrets unfold. This is one of the best seasons of the entire series in my opinion and is truly watch-worthy.

This is the last season of the Black Clover anime series that appears on our Black Clover watch order guide. The first few episodes of this season have anime-exclusive storylines that were supervised by the creator of the series himself. The anime then continues with the plotline from volume 24 of the manga till the last episode. This season deals with Asta, Yuno, Noelle, and the Black Bulls preparing to fight against the Spade Kingdom to protect the world from being suppressed by blood-thirsty oppressors.

As we near the end of the series, we get lost into Asta’s world that has magic, elves, swords, demons and other fantasy elements. This season truly fills us with anticipation of what is going to happen next, more so because it is still ongoing. I loved it and I can’t wait to see what is to come for Asta and friends in the future!

We rate this season 9.5/10 as it is still ongoing and we want to save for the future.

The title of this OVA is The All Magic Knights Thanksgiving and was premiered at Jump Special Anime Festa 2018. This is a special episode that features all the captains from different squads, Asta and Yuno taking part in a quiz show.  This episode was available for streaming in Japan in DTV a streaming service on December 2, 2018, after it was initially screened at the Jump Festival.

This is a funny and light-hearted OVA that takes a break from all the heavier sequences in the original anime series. I had a laugh watching this since the characters were present in a very out-of-character situation, but still maintained their individualism.

This is a Black Clover spin-off that is comic and humorous and follows the chibi (or petite) versions of the characters through their journeys. The plotline is similar to the first season however, the only difference is that it is a parody and meant to make the audience laugh. It also highlights all of the characters’ biggest stereotypes and personality flaws in a satirical manner.

Mugyutto! Black Clover is an extremely funny ONA and I loved every bit of it. It is a complete opposite to the heavy mood of the original anime series and honestly, although being a parody it does justice to the Black Clover series.

The Black Clover movie is set to release in mid-2022; however, we are still not aware of the plot or the character appearances. But we sure do hope that it will live up to the hype that has been created by the original Black Clover anime series. The announcement for the movie was made via a special video teaser.

There are a lot of expectations surrounding this story and hopefully, we won’t be disappointed.

Black Clover is one of the best anime series that I’ve ever watched and I will highly recommend you to watch it as well. This series plays with a lot of themes and I love that in spite of being so experimental it still retains its own unique characteristics that you won’t find in any other manga or anime. At first glance, the main plotline might seem similar to that of My Hero Academia but trust me it is nothing like that and there is so much more to its story. If you are planning to get into it, I hope this Black Clover watch order guide will give you some insight on what the story is all about and prepare you for all the awesomeness that is in store!

Do you think this is enough to convince you to start with the anime> Let us know in the comments down below.