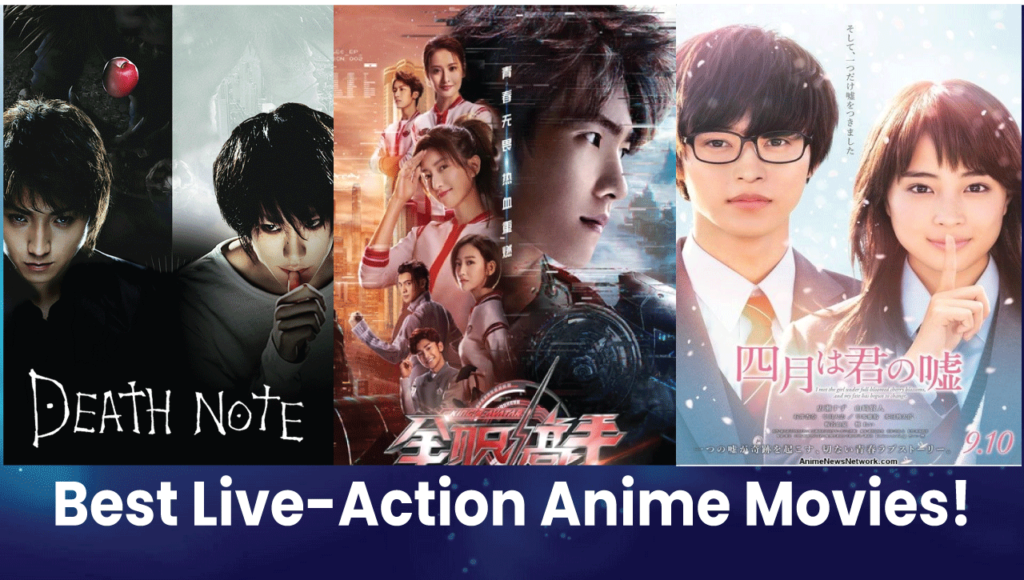 Anime is a big inspiration for the film industry as well. And not just the Japanese one but it has garnered the attention of American and Korean movie industries as well. This means that a lot of anime movies with real-life actors are being created! These live-action anime movies follow the storylines of the original anime or manga and try to recreate the scenes to their utmost detail. Sometimes it doesn’t work out and sometimes it does.

In this article, I will be giving you a look at some of the anime live-action movies I love a lot. You can take this opportunity to decide whether you would want to check them out yourself? You may have watched a lot of these too. So without further hesitation, let’s dive into some of the best live-action anime movies that are worth watching in this lifetime!

If you are a hardcore fan of anime, you are definitely acquainted with Kakegurui, one of the most popular gambling anime that has garnered some major clout in recent years. But did you know, that it also has a live-action movie to its name? Kakegurui: Compulsive Gambler is one of the best Japanese anime that has been turned into a real-life drama, in my opinion.

The plot is similar to the main series, with transfer student Yumeko Jabami entering the Hyakkou Private Academy, a prestigious school for the elite strata of the society. However, this school has a grading system that is a little out-of-the-box with the students being ranked according to their gambling winnings. The winners are awarded a lifetime of fame and fortune. They also get to dominate over the losers. It is up to Yumeko Jabami to turn the tables and prove that the stakes are actually high on her side!

Bleach is one of my favorite manga and anime of all time. When the live-action movie of this mind-blowing series came out, I was a little bit skeptical given the reputation surrounding live-action remakes. But I was proven wrong massively and it makes me really happy to accept that I was. Bleach has one of the best live-action movies out of all anime.

The movie narrates the first few arcs of the original Bleach manga and anime. Ichigo Kurosaki is a high-school student who has the ability to see spirits. One day, after getting attacked b a particularly vicious spirit known as a hollow, he comes across Rukia Kuchiki, a soul-reaper trying to exterminate that particular hollow. However, being unable to defeat it herself, she transfers her powers to Ichigo who emerges as a soul-reaper and defeats that hollow. Thus begins Ichigo’s life as a Substitute Soul Reaper. You can watch the Bleach live-action movie with English subs on Netflix

Gintama is another of my favorite series of all time. And it is needless to say that it has one of the best Japanese Live-action movies based on anime. It retains almost all the characters from the original series and the plot of the first movie is also similar to the first few arcs of the anime series.

The movie tells the tale of the Yorozuya or the odd-jobs trio consisting of rogue samurai Gintoki Sakata or the beloved Gin-chan/san, Shinpachi Shimura, the spectacled good-for-nothing yet a courageous and bold teenager and the mighty Kagura who loves to gorge on enormous amounts of food, visiting earth from another planet. The Yorozuya receives two missions, to help Elizabeth find Katsura Kotaro, Gintoki’s ex-partner, a rogue samurai, and Joui Rebel, while also helping a swordsmith to locate a dangerous sword named Benizakura. However, the plot is much thicker than that. To find out what happens, check out the Gintama live-action movie today!

The plot follows the original storyline with a mysterious alien-like creature named Koro-sensei being in charge of class 3-E of Kunugigaoka Junior High School, training them to slaughter him in the future as he poses a threat to the planet. This is owed to the fact that this weird alien/teacher destroyed half of the moon. Koro-Sensei alongside imparting assassination and fighting skills to his students also trains them in academics and day-to-day life skills. He is soon able to bond with the students of class 3-E and ameliorate their dwindling reputation as being weak students to some of the highly talented students of the school. But is Koro-Sensei really evil? To find out, you need to check out the Assassination Classroom live-action movie ASAP.

The Disastrous Life of Saiki K

If you are acquainted with this gold-mine of an anime, you are definitely going to LOVE the live-action movie. The Disastrous Life of Saiki K is a comedy slice-of-life anime that centers around wonder-child Saiki Kusuo who also possesses supernatural powers.

The show is inspired by the anime and narrates the tale of 16-year-old high school student Saiki Kusuo who was born with super-human abilities like mind reading, mind control, telepathy, telekinesis, teleportation, etc. Although it seemingly sounds cool, in Saiki’s POV this severely affects life as a whole. Although he tries his best to live a normal life, it’s as if drama follows him everywhere he goes. Join Saiki in his uncanny adventures with this hilarious live-action movie!

Death Note is one of the best series to have ever been created, However, when it comes to its live-action movies, their quality is debatable. As amazing as the Japanese versions are, the Netflix and Hollywood versions are just as terrible. But in this listicle, we are going to discuss the Japanese show based on the anime.

The movie is divided into two parts and follows the original storyline of the manga and the anime. The story follows the life of straight-As high-school student Light Yagami who is tired of his life and also the injustice in the world. He stumbles across the Death Note, that falls from the sky. Death Note turns out to be a notebook where if you write a person’s name picturing their face in your mind, they die in 40 secs of a heart attack if the cause of death isn’t mentioned. Light uses this notebook to hunt down criminals which he makes out to be “an act of justice” in his mind, while at the same time being chased by L Lawliet, the world’s greatest detective. He is also accompanied by Ryuk, a Shinigami (Death God) who is the original owner of the Death Note.

Orange is a popular coming-of-age drama that follows the lives of a group of teenagers who receive letters from the future to prevent a tragedy from happening in their present. I have talked about this anime a lot in my other articles and I had to mention the live-action show based on the anime.

Orange follows the story of Naho Takamiya, a 16-year-old high school student who receives letters from the future that advise her to prevent the death of her fellow classmate Kakeru Naruse. The letters turn out to be from herself 10 years in the future. Although initially, she is skeptical, she eventually comes to believe the letters after some things happen which prove the legitimacy of the same. Will Naho be able to save Kakeru this time? If you want to find out, you should definitely check out the Orange live-action movie. And those of you who have already watched the anime, the movie will definitely not disappoint you.

Live-action movies are either a yay or a nay, there is no in-between. There are some really great ones like those I’ve mentioned above. A lot of upcoming action live anime movies that are on the way. If you are someone who likes to finish off the entire palette when you get into an anime, I would ask you to not miss the live-action as well. Then you can decide for yourself whether you would give it a thumbs up or a thumbs down!

Can you add some other live-action anime movies to the list? Let us know in the comments!