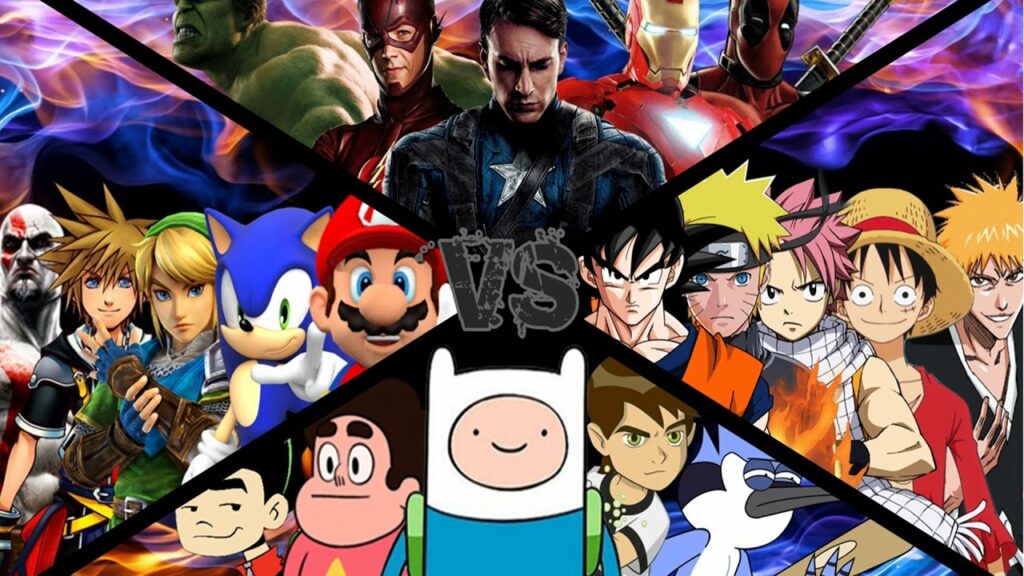 Almost everyone has come across the term “Anime” but most of us may not know what it actually means. Anime, Manga, and Cartoons are all similar ways of entertainment, relaxation, and even learning at the same time. They’re all forms of art that convey and share ideas, spirituality, and realities of the world through a unique use of words.

The combination of the digital world’s immense growth and the increasing popularity of Anime, Manga, and Cartoon has led to confusion between the terms. With this article, you’ll understand them better and bust the myths around anime, manga, and cartoon and differentiate between each form of art as well.

Anime is the Japanese word for ‘Animation’. The meticulous form of animation was created in Japan. Anime is characterized by the use of bright colors and graphic images. The central elements of fiction and fantasy fused with science give Anime a remarkable feel and look. The well thought and designed animation are being produced worldwide to cater to the fans not only amongst the Japanese but across the globe too.

The history of the word ‘Anime’ is quite fascinating. The Japanese word animēshiyon is a calque from the English word ‘Animation’ which was then turned into the English term ‘Anime’. So the term was shuffled between the Japanese and English language. So many popular anime TV shows and movies are based on this modified version of animation.

The ways anime fans enjoy the content is through dubbed anime and subbed anime. The ‘dub’ anime is where the anime is released with a new voice actor delivering the dialogue in another language that is recorded as a voiceover to make it understandable to a wider audience. While the ‘sub’ anime is where it is shown in the original voice i.e Japanese with the subtitles of another language.

This topic is quite debatable. Since Anime is majorly a Japanese creation and watching it elsewhere will need either English dubs or English subtitles.

All the Anime fans aka the purists usually argue that the original voice should not be altered in order to keep the original theme of the series. While the English dubbed anime version encourages the anime fan base to grow by ensuring they are able to understand and focus on the creative content without the trouble of reading the subtitles.

Whereas Manga is the Japanese version of graphic novels and comic books. It has similar detailings and intensified facial features along with bright colors. The Japanese term manga was created from the fusion of ‘man’ meaning aimless and ‘ga’ meaning pictures, hence, ‘aimless pictures’.

Manga is unlike the common superhero comics that are written by multiple writers and editorial boards. Manga is written by a single author. Mangas usually follows the lives of unexceptional people to keep the readers engaged.

Part 3: What is Cartoon?

The term ‘Cartoon’ is derived from the Italian word ‘Cartone’ which means ‘larger sheets of paper or card’. ‘Cartoon’ usually denotes a visual art as animation or maybe a funny drawing but historically it signifies a preparatory drawing for tapestry, oil painting, or even fresco. In literal meaning, a cartoon is a caricature that’s meant to be a one-dimensional non or semi-realistic portrayal or satire.

Most of us are familiar with Mr. Bean Cartoon. It can be animated i.e a motion picture of a series of illustrations making it look like a caricature that’s moving. During the 19th century, cartoons were more of illustrations that were meant to be humorous in newspapers and magazines that were converted into comic strips and animated films in the 20th century.

Part 4: What is the difference between Anime, Manga, and Cartoon

For the last part of this article we will compare the major three aspects and learn how to differentiate between anime, manga, and cartoon:

When you look at anime and manga they are often termed as the same art form. However, there is one major difference that separates anime from manga. Here is an effective trick you need to keep in mind for anime vs manga.

The Japanese storytelling is so energetic and bright filled with dynamic characters and caricatures which can be enjoyed by an adult or a child. Creators of manga, anime, or cartoons have their own unique ways to depict their ideas into exquisite and eloquent characters to send out a strong statement in an art form that is watchable by every individual regardless of their age or gender. So, it would be a total injustice to term one artform as better than the other, anime, manga and cartoons have millions of fans from all over the world and while some fans love to watch all these art forms, there are some fans who are very loyal to their preference. Let us know in the comment section below what art form do you love watching or reading!