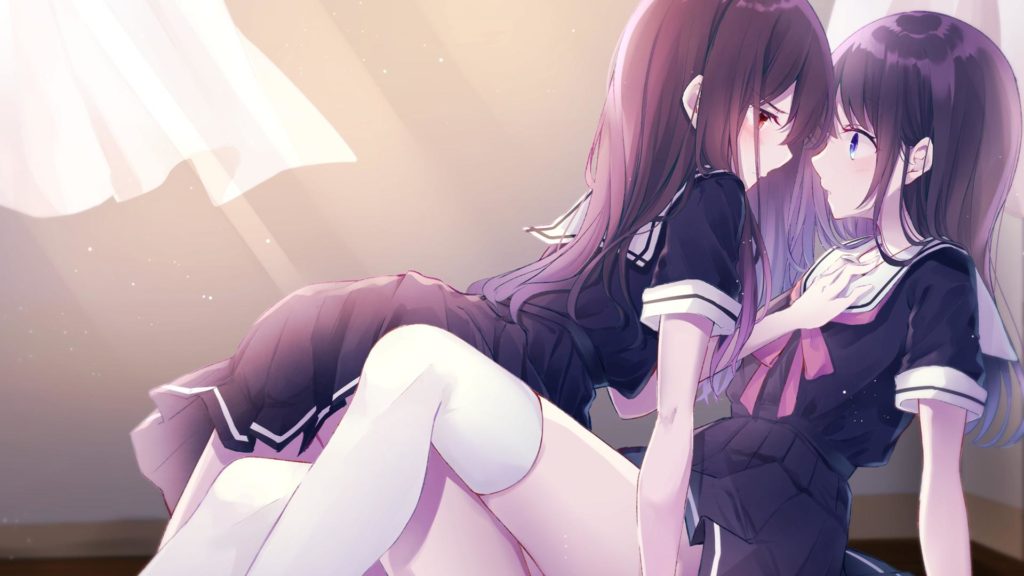 Yuri is a niche genre when it comes to anime. It directly translates to Girl’s love and portrays the romantic relationship between two women. It is the female counterpart of Yaoi and Bl or Boys’ Love which depicts the romantic relationship between two men. If you are someone trying to explore more niche genres like this Yuri anime recommendations listicle is for you!

I will be giving you the 7 best Yuri anime suggestions that will introduce you to the world of Yuri. And if you are already into the genre and want to explore more, I hope this listicle comes of use to you too.

Homosexuality is a taboo topic in a conservative society like that of Japan. However, this hasn’t stopped the manga creators to express themselves through the depiction of not just romance but the love and intimacy between two women. And with the growing awareness about the LGBTQIA+ community in Japan in recent times, Yuri animes are being watched by more people.

However, due to the explicit nature of this genre, there is a chance of unnecessary fetishization of this community. However, there are many manga artists who are trying to uproot this by depicting a more realistic nature of homosexual relationships between two women or two men.

Let us take a look at some of the best Yuri anime recommendations!

7 of the Best Yuri Anime Series

This yuri anime is based on its manga adaptation. The difference between anime and manga is the number of details that are present in the story. Often anime misses out on some crucial details that might contribute to the story.

It narrates a coming-of-story about the romance between two high school students who have just rejected someone. Yuu Koito befriends Touko Nanami, the student council president after she notices the latter reject a boy just like she had. You can read the manga to know the story better.

Just like the manga, the anime has also received praise and applause from fans all over the world. Therefore, I have mentioned this noteworthy anime in my Yuri anime recommendations list. I hope you enjoy watching this anime just like me.

This anime has gotten all the details in the manga quite precisely and has done it justice.  If you are looking for a yuri anime with a great storyline and an equally good visual representation, Bloom Into You is your way to go.

This yuri anime also falls under the category of mystery and thriller anime. This anime is mention-worthy in my Yuri anime recommendations list due to its distinction from your cookie-cutter romance and fluff Yuri.

Noir tells the story of two murderers, Mireille Bouquet, a hitman who teams up with Kirika Yuumura, a young woman with amnesia, who remembers nothing about herself after she receives a message from her. However, Kirika is an assassin and asks for Mireille’s help to regain her lost memories. But is there more to their past than they know?

Embark on this journey of bullets, bloodshed, and suspense as Mireille and Kirika try to unravel the truth of their mysterious past.

What attracted me most about Noir is its individuality and refreshing plotline. If you want to read Yuri manga but don’t like cheesy romance, then Noir is a must-watch for you!

This is again a Yuri anime adaptation from the manga of the same name. Adachi and Shimamura tell the story of the two titular high school students. This slice-of-life anime is a must-watch if you are looking for something light-hearted.

The most unique part of this anime is its visual appeal. The animation is quite daunting and soothing to the eyes. The plotline has just the right amount of fluff and humor, at the same time painting a very casual portrait of Japanese high school life.

This is one anime that I HAVE to mention in my Yuri anime recommendations list solely because of its calming effect. If you don’t want to watch anything intense, you can watch this Yuri anime and chill out.

This is another slice-of-life, high school-based Yuri rom-com anime that impressed me. The anime narrates the story of Sumika Murasame who has an unrequited crush on her best friend Ushio Kazama. However, she cannot confess her love for her best friend as she does not fit into Kazama’s type. Kazama is an out lesbian who notices everyone else except Sumika. Will they ever be able to get together?

This light-hearted rom-com is best for a casual watch. The anime maintains its humorous streak alongside being your usual romantic drama. The plotline is also quite intriguing and will keep you hooked to the series till the very end, similar to that of Ouran High School Host Club.

I will recommend this anime to those looking for a light watch.

This is anime in my Yuri anime recommendations list that has been adapted from the manga of the same name by Takako Shimura. It narrates the story of Akira Okudaira who reunites with her friend from 10 years ago named Fumi Manjome. But soon feelings blossom and end up complicating the relationship between the childhood friends.

This is a story of falling in love and coming to terms with one’s sexuality. Aoi Hana is a good watch for all those who are trying to get into this genre. As for me, it definitely invoked a lot of emotions and by the time the series was over, I shared my happiness with a few characters while shedding a tear or two for a few others. Aoi Hana is definitely worth the watch.

Kanamewo is one of the best Yuri anime movies. It features a young, anonymous woman who stumbles upon a tree goddess one day while biking home from work. She soon figures out that the tree goddess shrine has been destroyed for construction purposes. She brings the goddess home with her and they soon develop a relationship. But what happens next?

Kanamewo tells a very sweet story about the relationship between a human and a supernatural deity. I would recommend this yuri anime movie to all those looking for a break from anime series and want to watch something short yet impactful.

Kase-San and the Morning Glories

Kase-san and the Morning Glories is a Yuri anime OVA that is based upon the Kase-san manga series. The OVA narrates the story of Yamada and Kase who are in the same high school but different grades. One day Kase-san notices Yamada planting morning glories and chats her up. But this might be the beginning of something beautiful.

Morning glories are a symbol of new beginnings and both Yamada and Kase are in for a brand-new story. This is a pretty heart-warming OVA that I would suggest all Yuri enthusiasts watch.

Yuri anime has gained a lot of attention in recent times. If you are keen to divulge more into this genre then I hope my Yuri anime Recommendations list will be useful. You can also download subtitles from external subtitle files and add them to your downloaded anime, in case that’s what you’re planning. There are lots of anime streaming sites that let you download anime for free like Crunchyroll and Funimation.

You can also read the original mangas of the anime adaptations of the few Yuri anime that I mentioned in the Listicle. If you found this Yuri anime recommendations listicle helpful, let us know in the comments below!